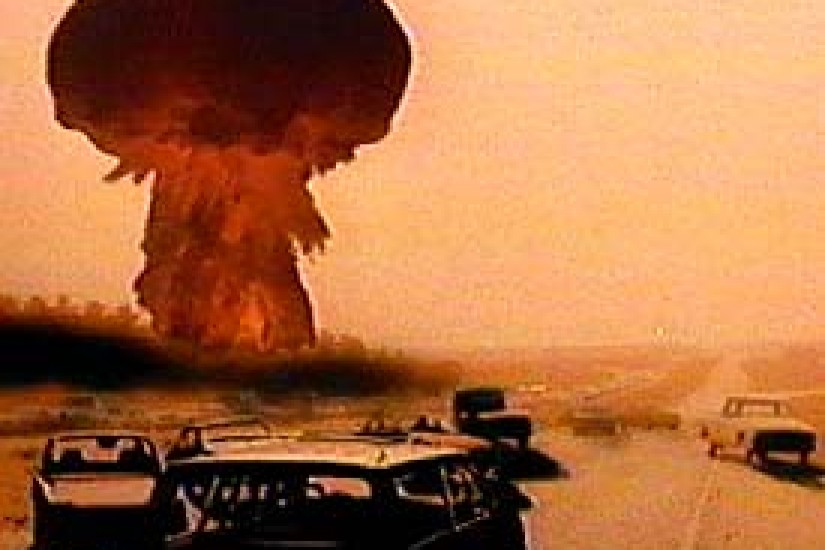 The nuclear explosion depicted in the television film, 'The Day After,' which coincidentally aired just a few days after NATO's Able Archer 83 exercise (1983).
The Day After/Wikimedia

On November 9th 1983, the leadership of the Soviet Union nearly ordered a full pre-emptive nuclear strike against the US and Western Europe. The entire Soviet nuclear arsenal was readied. Huge SS-19 intercontinental ballistic missiles in their silos were put on standby. SS-20 mobile missile launchers deployed to their battle stations in the forests and swamps of Russia. Nuclear submarines slipped out of port and took up their launch positions. In East Germany and Poland, aircraft went onto strip-alert with their engines on, waiting at the end of runways for orders.

This extraordinary incident was not picked up at the time and has remained little known ever since. Unlike the Cuban Missile Crisis that took place very much in the open, with Presidential television addresses and hour-by-hour news reports, the November 1983 crisis took place entirely behind closed doors. Moreover, the Central Intelligence Agency and the Defense Intelligence Agency totally missed it, prompting Robert Gates (then deputy director of the CIA) to say later, “We may have been at the brink of nuclear war and not even known it.”

How did this come about? 1983 was a supremely dangerous year. Ronald Reagan in the White House was using powerful and aggressive language against the Soviet Union, which in March he called an evil empire. Later that month he launched his Strategic Defense Initiative aimed at shooting down incoming missiles in space, rapidly labeled his Star Wars program. This initiative hugely destabilized the Kremlin, whose leaders feared that decades of nuclear expenditure would overnight be made useless. In addition, he was overseeing the biggest peacetime build up of conventional military forces in decades, nearly doubling the Defense budget. The Pentagon got new bombers, tanks and missiles and a huge expansion of the Navy. The National Security Agency budget increased by 150%. The military began a series of Psychological Operations (or PSYOPS) against the Soviet Union. Aircraft flew up to the edge of Soviet airspace and then turned away at the last minute. Two naval carrier groups led by the USS Enterprise and the USS Midway began an exercise in the Sea of Okhotsk to test Soviet reaction times and defensive postures. Reagan wanted ultimately to negotiate with the Soviet Union but only from a position of strength.