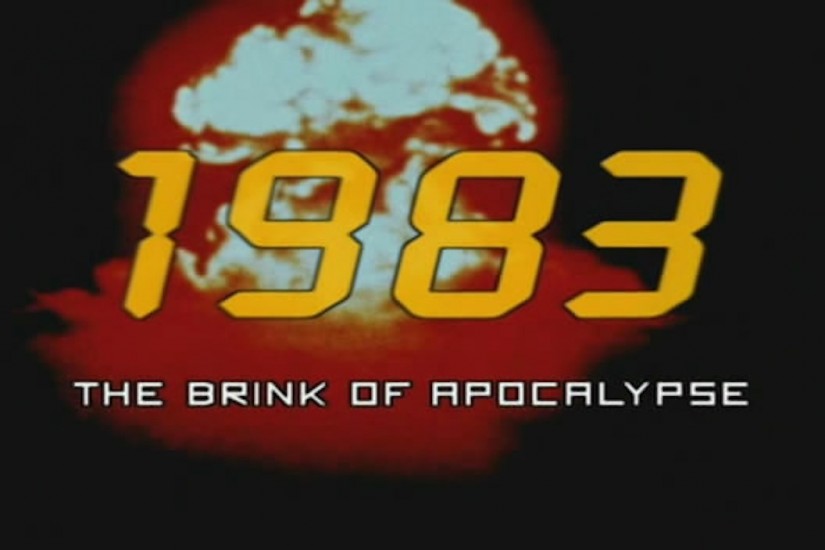 The title shot for the 2008 documentary entitled "1983: The Brink of Apocalypse."
Wikimedia Commons
…

On September 1, a Korean passenger plane flying from Anchorage to Seoul strayed off course and crossed paths with an American spy plane just before blundering into Soviet airspace. Soviet commanders, still smarting from the American incursions earlier in the year, sent fighters to shoot down the plane. All 269 passengers and crew perished, among them an American congressman. Soviet leaders insisted publicly that the plane was on a spy mission; privately, Andropov called it a “gross blunder.” The Reagan administration accused the Soviets of premeditated murder, despite notice from the US intelligence community that Soviet commanders may have mistaken the passenger jet for the spy plane. An article in The Nation the following year went further, making a powerful argument that the Defense Department, through its early warning and communications, command, control, and intelligence systems, should have been well aware of KAL 007’s flight path and could have warned it off at any time, but chose not to.

Less than a month later, a software glitch at a Soviet early-warning station reported five separate launches of American ICBMs. Thanks to the cool head of the officer on duty, no retaliation was ordered, but the malfunction stoked Soviet fears that their early-warning systems might not be up to the task.

On October 23, a massive truck bomb exploded at the US Marine barracks in Beirut, Lebanon, killing 241 American service members. In response, US embassies and military installations across the globe went on heightened alert.

Two days later, the US invasion of the tiny Caribbean island of Grenada caused a dramatic spike in cable traffic between London and Washington—prompted by Prime Minister Margaret Thatcher’s fury at the American move—and ticked yet another box in the RYAN checklist.

Meanwhile, NATO had begun Autumn Forge, a massive annual war game stretching from Norway to Turkey that involved approximately 100,000 NATO personnel, including 19,000 American troops airlifted across the Atlantic under radio silence. The finale was Able Archer, in which NATO practiced procedures for launching nuclear weapons at Warsaw Pact forces. Although it was designed to be a command-post exercise, involving no troops, there were enough troops on the ground to sow confusion.

Downing’s book makes the most compelling case yet that the Soviet reaction to Able Archer was extraordinary. Cables coming into the London KGB residency warned that NATO forces had gone on alert and might be preparing for the long-awaited first strike, possibly beginning in seven to 10 days.