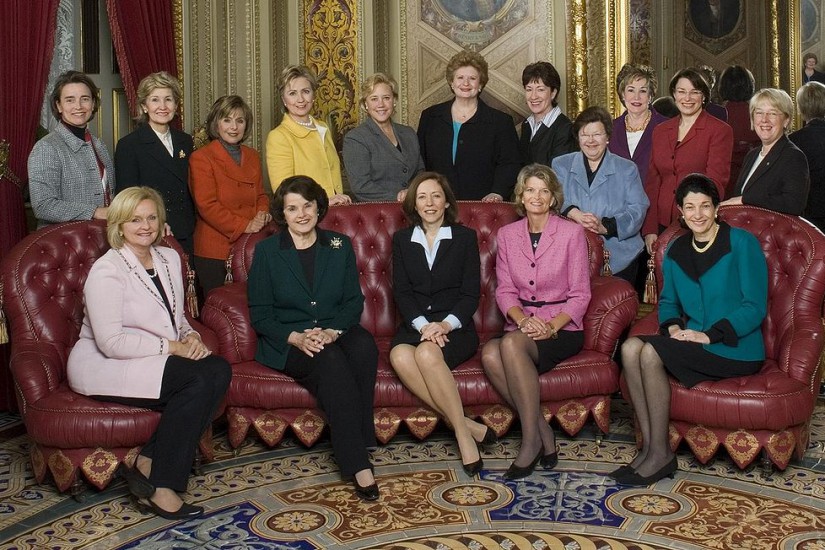 The female senators of the 110th U.S. Congress (2007).
US Senate/Wikimedia Commons

One brisk morning in early 1993, Carol Moseley-Braun selected a favorite pantsuit from her closet and went off to her new job in Washington, D.C. The Democrat, who had previously served in the Illinois state Senate for a decade, had been elected in November 1992 on a platform of women's rights and civil rights. When she won, she replaced incumbent Democratic Senator Alan Dixon and became the first African-American woman to serve as a United States senator. But when she set foot on the Senate floor that winter day, wearing "my nice outfit," as she said later, "the gasps were audible." Unbeknownst to Moseley-Braun—who had donned pantsuits frequently during her time in the Illinois legislature—women were forbidden from wearing pants on the Senate floor.

She had broken a rule, albeit an unwritten one. It was enforced by peer pressure and official Senate doorkeepers who could turn away anyone they didn't think looked "appropriate," and it remained an important fact of daily life among women in the Senate for decades. That is, until Moseley-Braun and another political pioneer intervened to challenge it.

Like other gentlemen of their day, early senators wore waistcoats, frock coats, and breeches with stockings—nothing too fancy, since ostentatious clothing had a whiff of aristocracy about it. But by the late 19th century, senators were dressing in formal clothes, complete with vests, cutaway coats, and striped trousers. Fashion was generally consistent despite some regional differences, and experienced senators policed newer members, ensuring they were dressed to preserve the dignity of the legislative chamber.