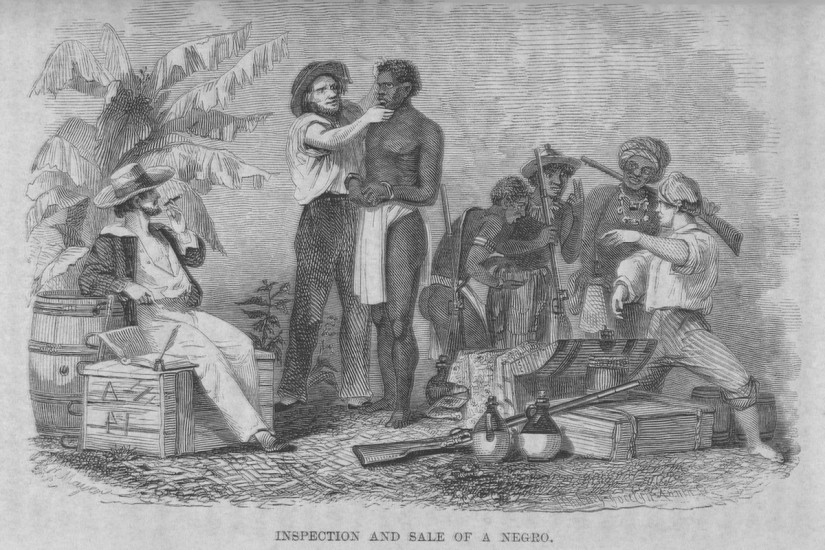 "Inspection and Sale of a Negro". From "Brantz Mayer, Captain Canot; or, Twenty years an African slaver" (New York, 1854).
slaveryimages.org
…

Race as we understand it—a biological taxonomy that turns physical difference into relations of domination—is a product of the Enlightenment. Racism as we understand it now, as a socio-political order based on the permanent hierarchy of particular groups, developed as an attempt to resolve the fundamental contradiction between professing liberty and upholding slavery. Those who claim the Enlightenment’s mantle now should grapple with that legacy and what it means for our understanding of the modern world.

To say that “race” and “racism” are products of the Enlightenment is not to say that humans never held slaves or otherwise classified each other prior to the 18th century. Recent scholarship shows how proto- and early forms of modern race thinking (you could call them racialism) existed in medieval Europe, with near-modern forms taking shape in the 15th and 16th centuries. In Spain, for example, we see the turn from anti-Judaism to anti-Semitism, where Jewish ancestry itself was grounds for suspicion, versus Jewish practice. And as historian George Fredrickson notes in Racism: A Short History, “the prejudice and discrimination directed at the Irish on one side of Europe and certain Slavic peoples on the other foreshadowed the dichotomy between civilization and savagery that would characterize imperial expansion beyond the European continent.” One can find nascent forms of all of these ideas in antiquity—indeed, early modern thinkers drew from all of these sources to build our notion of race. But it took the scientific thought of the Enlightenment to create an enduring racial taxonomy and the “color-coded, white-over-black” ideology with which we are familiar. This project, undertaken by the leading thinkers of the time, involved “the setting aside of the metaphysical and theological scheme of things for a more logical description and classification that ordered humankind in terms of physiological and mental criteria based on observable ‘facts’ and tested evidence,” as historian Ivan Hannaford wrote in Race: The History of an Idea in the West.

Johann Friedrich Blumenbach’s influential 1776 volume On the Natural Varieties of Mankind posited five divisions of humanity, beginning with “Caucasians.” These frameworks evolved into theories of racial difference, developed to square a conceptual circle. If natural rights are universal—if everyone has the capacity to reason—then what is the explanation for enslaved Africans or “savages” in the Americas, who do not seem to act and reason like white Europeans? The answer is biological inferiority, in accordance with those racial classifications.

Immanuel Kant sketched out a more formalized racial hierarchy in his own anthropological work.