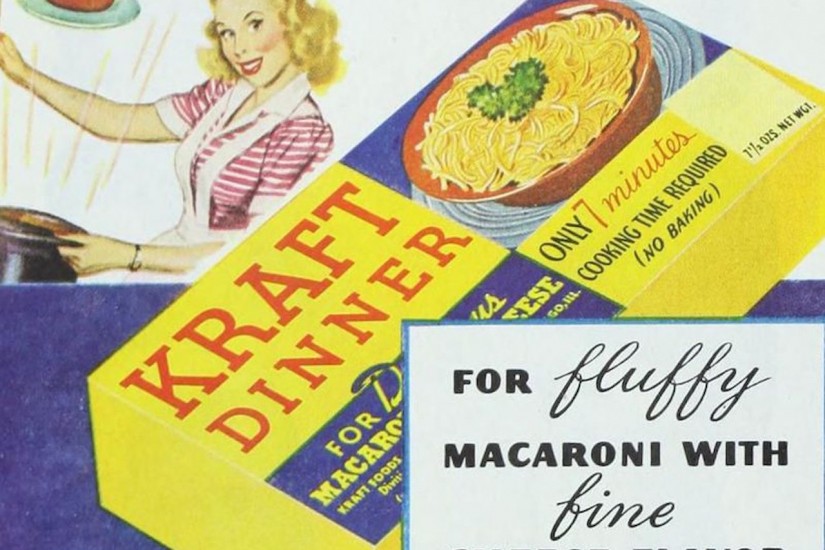 A Kraft advertisement in a 1948 edition of the Ladies’ Home Journal.
Wikimedia Commons
…

Macaroni and cheese has been served as long as there has been a United States of America, but in a 20th-century economy driven by convenience packaging and industrialization, it was elevated to an ideal American food: Pasta and processed cheese are very cheap to make and easy to ship and store, and they certainly fill up a belly. It’s no wonder a hot gooey Velveeta mac and cheese tastes like a winner to so many Americans, even those attending a fancy contest in San Francisco.

As with many foods, white culture and African-American culture diverge on the make and use of macaroni and cheese. Food historian Adrian Miller points out that while Thomas Jefferson often gets credit for popularizing macaroni and cheese in the United States, it was of course his enslaved black chef James Hemmings who learned to cook it. In the Antebellum South, mac and cheese was a weekend and celebration food. Many African Americans have continued this tradition to this day.

I have a collection of quotes I post above my computer for writing inspiration and as a reminder to examine my own historical assumptions. One is from Miller from the Charlotte Observer on November 15, 2017: “They [older black people interviewed by Miller for his book] were convinced mac & cheese was something white people stole from us. I thought they were kidding, but they were like, ‘No, it’s like rock ‘n’ roll—we started that.’ They were serious.”

The one thing that does seem to unify people who eat macaroni and cheese is that everyone views it as “comfort food”: Whichever form of mac and cheese people grew up with, it provides them with something visceral that they want to recreate as adults. In my experience selling food, I’ve seen many folks who eschew one of the major components of the dish, due to allergies or politics, yet expend great effort trying to find or create gluten-free or vegan simulacra. It’s just that important to them.