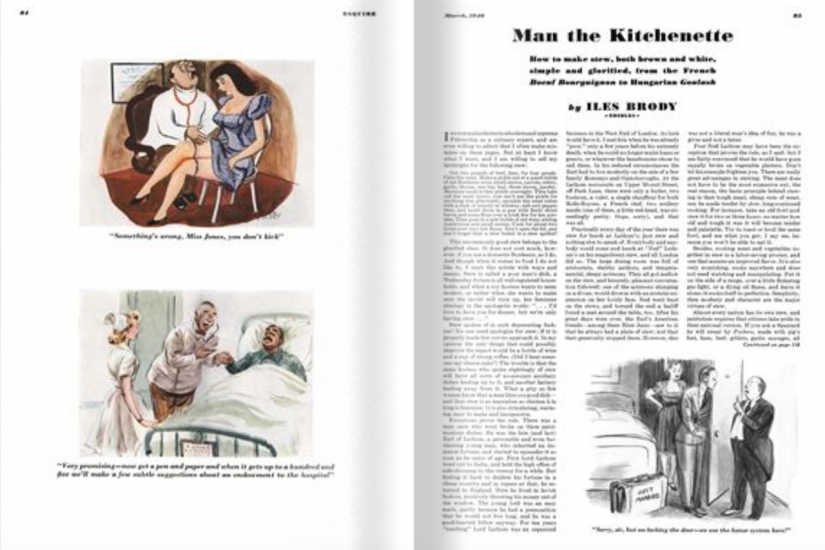 The differences between “women’s tastes” and “men’s tastes” are long entrenched in American cultural history. As the stereotype goes, meat is manly and women love salad.

Or is it that simple? A look back at the food writing directed at men in the period following the Second World War reveals a different relationship between men and salad. In this era, making and eating a salad wasn’t frilly and feminine, but was actually one of the most masculine things a man could do.

In a 1940 installment of his long-running Esquire cooking column “Man the Kitchenette,” Iles Brody writes: “salads are really the man’s department… Only a man can make a perfect salad,” which was “never sweet and fussy like a woman’s.” Given the right context, self-confidence, and ingredients, a man could transcend the girly boundaries of vegetables, reasserting his dominance in the kitchen and in his relationship to women. A growing body of instructional literature aimed to teach him how to do it.

The era of the manly salad was one of deep anxiety regarding gender roles and labor in American cultural life. In November 1958, Arthur Schlesinger, Jr., wrote a feature for Esquire about the “crisis of American masculinity” facing the nation. When it came to home life, he wrote, “the American man is found as never before as a substitute for wife and mother… The American woman meanwhile takes over more and more of the big decisions, controlling them indirectly when she cannot do so directly.” Esquire was a prime example (along with Playboy, which was launched in 1953) of media that promised to help men through the crisis and teach them how to regain their supposedly lost manhood.

The magazines included guides for dressing, grooming, dating, and—notably—cooking. Celebrity chefs, cookbook authors, and columnists instructed readers on the specific (and chauvinistic) traits of a freewheeling bachelor in the kitchen, creating a full portrait of escapism from the drudgery of breadwinning and nagging from the “little women” in men’s lives. Playboy and Esquire, the Americanist Katharina Vester writes in her 2015 book A Taste of Power, “showed that many of the tasks that were traditionally connoted with women’s authority and labor, such as cooking, could be easily taken over by men (who, if they set their minds to it, would also do a much better job).”