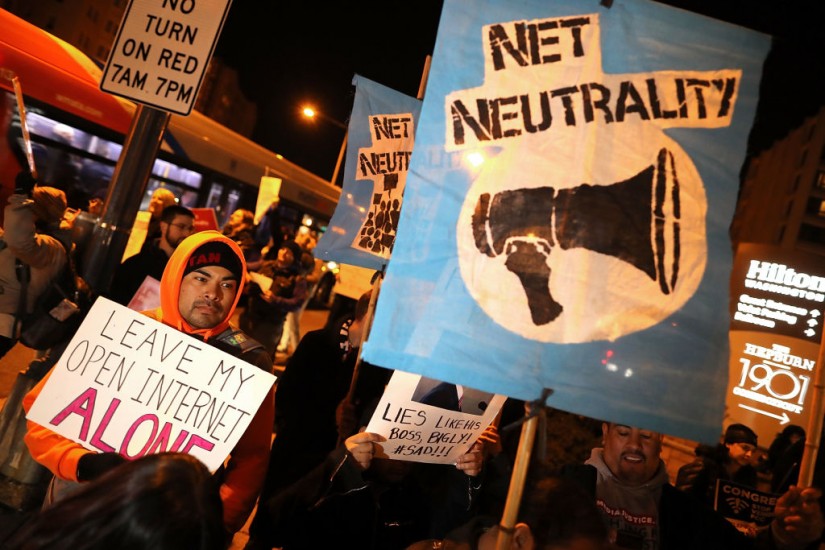 About 60 demonstrators gather outside of the 31st Annual Chairman's Dinner to show their support for net neutrality on December 7, 201.
Chip Somodevilla/Getty Images
…

The current net neutrality debate took shape during the early broadband era, beginning around 2000. During the 1990s, most people had reached the internet using dial-up services like AOL and CompuServe (the descendants of the “data-processing industry”), or thousands of small independent Internet Service Providers. AOL and these other firms technically relied on the underlying telephone network, and the protections of those 1970s rules—the Computer Inquiries—from interference or abuse by the telephone company.

But as phone and cable companies began deploying broadband networks in the late 1990s—using high-speed (for the time) DSL and cable-broadband technologies— the questions first addressed in the 1970s reasserted themselves in new forms. How would the owners of “the pipes”—the wires that constitute the physical network—treat the applications that ran over those wires?

This is the question that interested me when I left Silicon Valley and moved into academia in 2002. It seemed to me that the broadband carriers had mixed motives. On the one hand, the sellers of broadband wanted and needed consumers to ditch dial-up and pay (more) for broadband. Many consumers were already accustomed to getting the “whole” internet from an ISP, not just a few sites approved by the carrier. AOL’s “walled garden” strategy—a network of sites that paid AOL—had backfired, suggesting that consumers wanted the open internet.

At the same time, broadband providers had both incentives and the means to block, throttle, or threaten some applications or sites. First, some of the new internet applications, like “voice over IP” telephone service or streaming video, competed directly with the carriers’ telephone or video offerings. Second, the phone and cable providers wanted to use their control over access to extract more money, either from the new internet sites (so called “termination fees”) or from customers. These aspirations were memorably captured by AT&T CEO Ed Whitacre in 2005:


"Now what they [the Internet firms] would like to do is use my pipes free, but I ain't going to let them do that because we have spent this capital and we have to have a return on it. … Why should they be allowed to use my pipes? The internet can't be free in that sense, because we and the cable companies have made an investment and for a Google or Yahoo or Vonage or anybody to expect to use these pipes free is nuts."
Indeed, by the early 2000s there were signs that the cable and phone companies intended to use their control of the physical architecture in restrictive ways.
…
View on Wired
View Connections