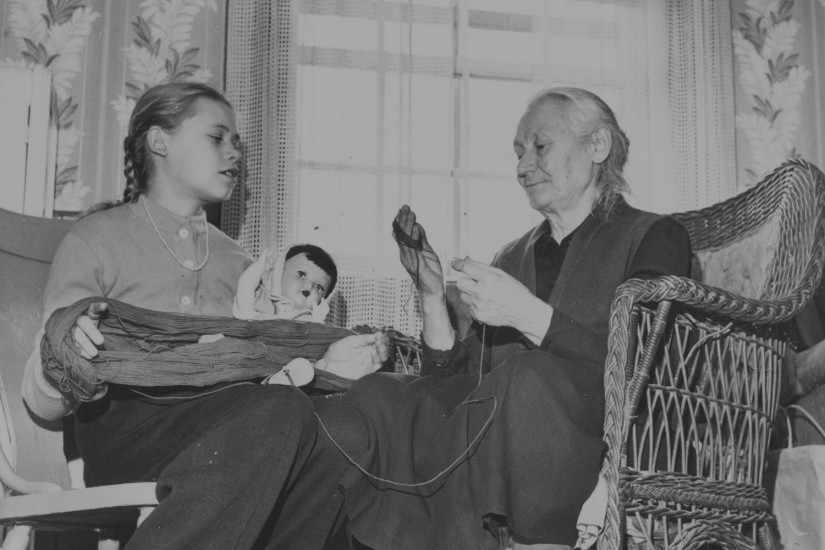 A young girl holds knitting wool for her grandmother to wind, circa 1955.
Fox Photos/Getty Images

I recently Googled my grandmother’s name. I wanted to know the date she died, so I could better place a childhood memory. In the 21st century, embarrassingly, the internet has become the family Bible. The first hit was a link to my own book, a history of Southern motherhood. I had dedicated the book, in part, to her. My stomach gave a funny flip. I had gone looking for my grandmother and found myself—and yet my own writing was resurrecting her. This is an ouroboros of women’s history. We search for our mothers in the past and find only mirrors.

Women are notoriously hard to find in American archives. Their names keep getting folded under. You have to trace fathers and husbands to triangulate an identity. Names float down the generations on rafts of privilege: whiteness helps, as does wealth, and maleness makes everything simpler. A George Washington is a George Washington eternal. (His wife Martha was a Dandridge, then a Custis, then a Washington.) I am white, and my mother’s ancestors were of the class that kept others in bondage. Even with all their record-keeping, I can see only eight generations down the female line: Elise, Elise, Elise, Ellen, Elizabeth, Elizabeth, Mary, Ann, and then a woman identified as “Unknown.” Unknown couldn’t legally own property, and had nothing to pass down except the intangibles of her voice, her scent, whatever knowledge she possessed, and, perhaps, her first name. Maybe she was named Ann too.

Though trained as a historian, I am now a novelist, a sequence of careers that anyone who knew me years ago could have predicted. The fictions I wrote as a youth were nearly suffocated with names. I was a budding genealogist, a self-historian, and was entranced by naming—that defining impulse that led me also to fill my mother’s grade books with made-up students. But naming is nurturing too; I wanted to rope my characters into a web of relation. When I was 12 or 13, I learned about Lydia, an ancestor on a different branch of the family who would have been about my age during the Revolutionary War. The story I started writing about her got sidetracked by a detailed map I made of her 45 cousins, but what narrative I spun was marked by my obsessions.