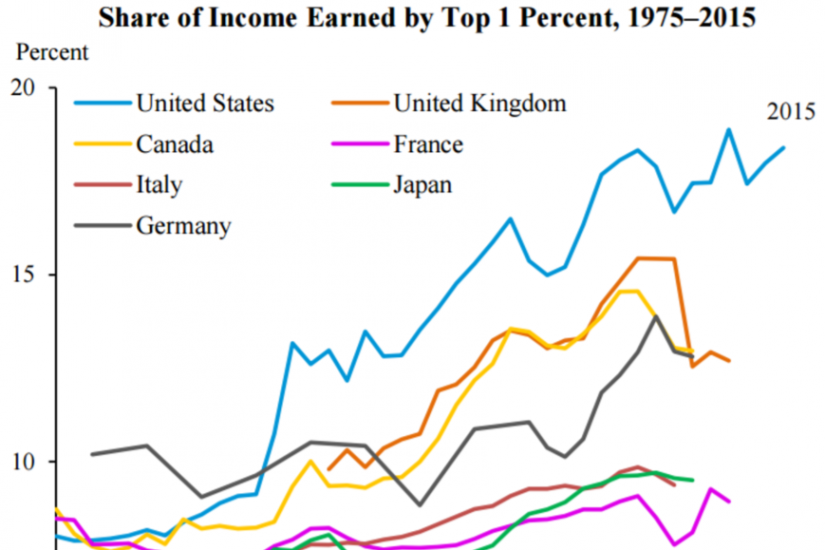 Share of income earned by the top 1% from 1975-2015 of selected developed countries reported in the 2017 Economic Report of the President.
U.S. Council of Economic Advisers/White House/Wikimedia
…

According to Sitaraman, who was a staffer in Senator Elizabeth Warren’s office and now teaches at Vanderbilt Law School, the Constitution was written and adopted with the understanding that the political system it established could only work in a fairly equal economy, with no vast concentration of wealth and power at the top, no wasteland of poverty and exploitation at the bottom, and a big mass of the “middling sort” of people at the center.

Although the Constitution says very little about economic life, Sitaraman shows that plenty of people in the period of the nation’s founding believed that political power reliably followed the distribution of wealth. In nations where land and resources were concentrated among the few, political power was concentrated there too; in nations with a large middle class, power was more evenly distributed and democracy could thrive. This was why the American founders believed the United States could become a republic of self-governing citizens. Land was widely available, and most white men could find a place in the country’s economic life. For that reason, they could also find one in its political life. But if American wealth ever grew as concentrated as it was in England and other aristocratic societies, a republic would prove impossible: Welcome to the oligarchy.

This fear of large concentrations of wealth and power came to fruition in America’s first Gilded Age at the end of the 19th century, and it has again today. It is the present-day oligarchy that led Sitaraman back to earlier egalitarian visions in search of an alternative path. While he gives us a large sweeping historical narrative, Sitaraman speaks unabashedly to the present moment. He believes his book’s argument—that America cannot be America without a strong middle class—is essential to understanding the world we live in today and in particular the politics of people like Elizabeth Warren, Bernie Sanders, and even the plutocrat in the White House. (Trump’s victory came along late enough that it receives only a hurried note in the book, but Sitaraman refers frequently to the founding fathers’ warning that extreme inequality is the breeding ground of demagogues.)

As Sitaraman acknowledges, his argument isn’t new; instead, he is trying to recover an American tradition as old as the country itself, one that gets revived whenever economic inequality becomes central to our politics.