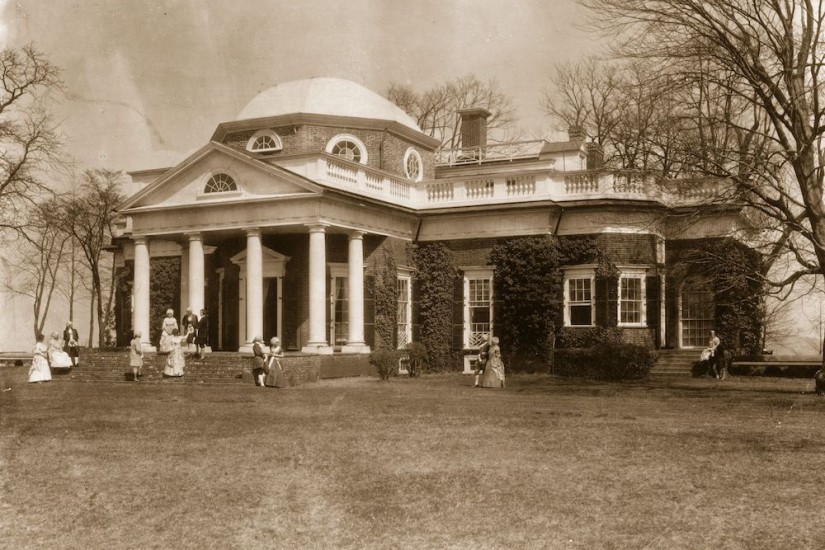 Students of the University of Virginia pose as house guests in 1930 outside Monticello, the home of Thomas Jefferson.
Hulton Archive/Getty Images

You cannot see Thomas Jefferson’s mansion, Monticello, from the small room burrowed into the ground along the south wing of his estate. When the door is closed, you can’t see anything at all, because it is a windowless room, with a low ceiling and damp walls. But this was, very likely, the room inhabited by Sally Hemings, the enslaved woman who bore six of Jefferson’s children, a woman about whom little is known, who lived her life as Jefferson’s property, was considered his concubine, was a source of scandal and a political liability, and yet who might be considered the first lady to the third president of the United States if that didn’t presume her relationship to Jefferson was voluntary.

On Saturday, Monticello will open the room to the public, with a small exhibition devoted to the life of Hemings and the Hemings family. Reclaiming this space, which previously had been used as a public restroom, marks the completion of a five-year plan called the Mountaintop Project, which has seen significant changes to the beloved estate of the founding father. Using archaeology and other evidence, Monticello curators have restored Mulberry Row, where enslaved people lived and labored, and made changes (including to the wallpaper, paint and furnishings) inside the mansion, restored the north and south wings, and opened the upstairs rooms to the public on special tours. But symbolically and emotionally, the restoration of the Hemings room is the heart of the new interpretation of Monticello, and it makes tangible a relationship that has been controversial since rumors of “Dusky Sally” became part of American political invective in the early 19th century.

“Our goal has been to get the stories back and get the landscape back, so people understand the proximity of Jefferson’s house to this community,” says Leslie Greene Bowman, president of the Thomas Jefferson Foundation, which owns and operates the historical site. “People used to think, ‘Oh, the slaves were down on the plantation.’ No, they were right here in the middle of it.”

It has been a quarter-century since Monticello began offering tours that focused on Jefferson and slavery, and over the course of that time, the public has largely come to accept what was once routinely discounted by historians: that Jefferson was the father of Hemings’s children.