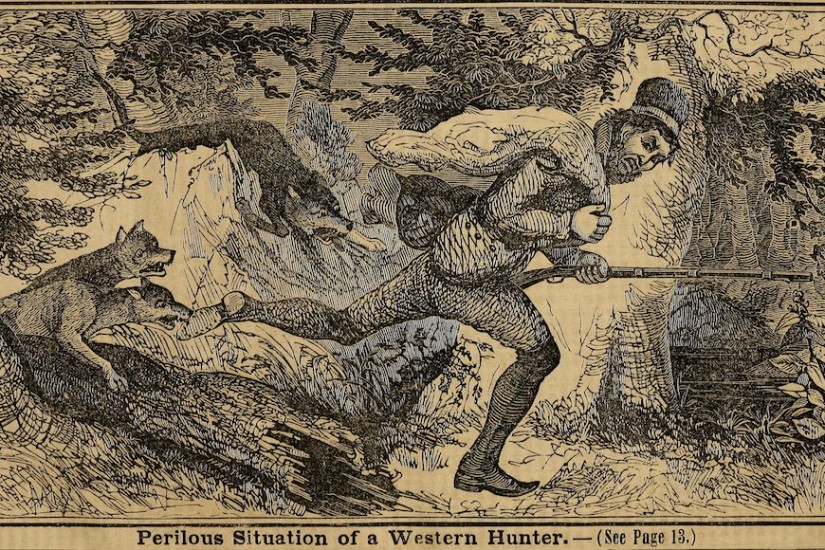 “Perilous Situation of a Western Hunter,” from The Crockett Almanac, 1842.
The Panorama
…

The most prominent myth obscuring historical understanding of the Second Amendment relates to America’s frontier past. Although historical scholarship has effectively refuted this mythology, purging it from virtually all of the major college-level textbooks and the Advanced Placement U.S. history curriculum, constitutional culture, both inside and outside of the legal academy, has not. Prominent judges continue to take their cues about the American past from classic Hollywood westerns, Walt Disney’s The Adventures of David Crockett, and The Little House on the Prairie novels of Laura Engels Wilder. The result is a wildly distorted account of the Second Amendment’s origins and early American efforts at gun regulation.

The myth of the frontier is one of the most enduring in American history; it has been commodified and used to market everything from cigarettes to cars, and has been central to firearms sales for more than a century. It is a little shocking that the same myths used to sell cigarettes played a pivotal role in two federal appeals court decisions: Moore v. Madigan and Peruta v. San Diego. Both cases evoked “the familiar image” of an armed “eighteenth-century frontiersman . . . ‘obtain[ing] supplies from the nearest trading post.” Contrary to this mythic view of the American past, the bulk of the nation’s population in the eighteenth century was clustered along the coast, not the frontier. Nor is there any evidence that members of the Founding era such as George Mason or James Madison were thinking about the plight of the tiny percentage of the American people who lived on the frontier when they discussed the right to keep and bear arms in the Virginia Ratification Convention. The debates in the First Congress certainly do not afford much evidence that this was a major concern. Given the realities of American society at this point in the nation’s history, such concerns would have been odd. In 1790, the mean population center of the United States, a standard measure of population distribution, was situated somewhere between Baltimore and Philadelphia, not western Kentucky, northern Maine, or the Ohio valley.

…
View on The Panorama
View Connections