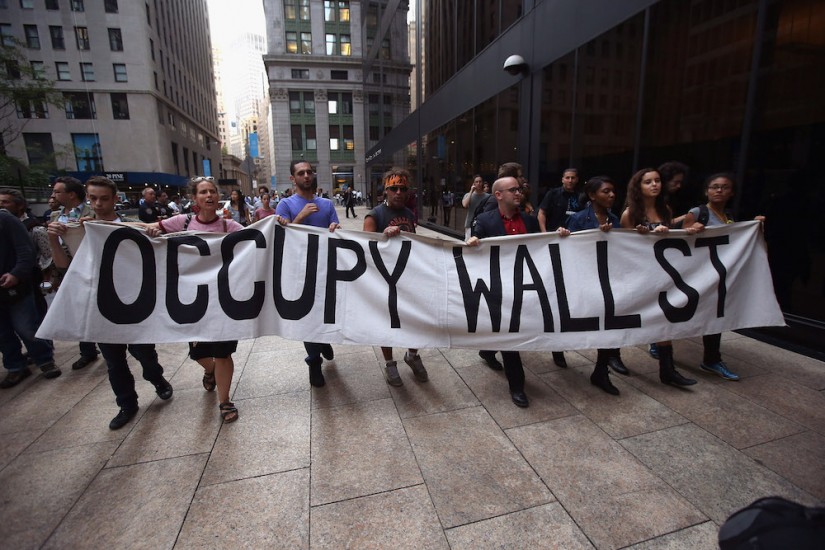 Protesters march near the New York Stock Exchange during a demonstration marking the one-year anniversary of the Occupy Wall Street movement on September 17, 2012.
John Moore/Getty Images
…

The book discusses New York’s ritualized, carnivalesque revolts of the 18th and early 19th centuries. What makes a riot “carnivalesque”?

Across the Western world in the preindustrial era, rioting was part of the social structure. It was a common way for the underclasses to express discontent. Rioting was typically against property, even if individuals were implicated. Proto-working class people would, for example, burn officials in effigy or dismantle housing. They might take furniture out of a home and burn it in a bonfire.

While this expressed dissatisfaction, it served as something of a safety valve: When the unrest wound down, the existing order would generally reestablish itself. Such rioting was often associated with the liturgical calendar or pagan holidays, such as Halloween.

But in tandem with carnivalesque rioting were uprisings by African Americans—both slaves and those who were free—as well as attacks on blacks by white rioters. These attacks exceeded the bounds of the ritualistic; they constituted out-and-out racist violence.

How did New York’s revolts change in the 18th and 19th centuries, and why?

Ritualistic riots started to fade in the first decades of the 19th century with the rise of industrialization, and the changing nature of the city brought this about. The growth of a large working class, mostly comprised of immigrants, created a new way of protesting. By the 1830s and 1840s, workers were revolting against capitalists.

However, during the late 20th and early 21st centuries, we see aspects of ritualized, carnivalesque protests reappear. In fact, these types of riots faded but never really disappeared; we have always seen them, for instance, in the rioting that occurs after sports events. Protesters such as the New Yorkers who demonstrated against the World Economic Forum in 2002 and the Republican National Convention in 2004 made a conscious effort to revive the theatrical aspects of protests, such as by using Guy Fawkes masks, street theater, and effigies. They are eye-catching strategies.