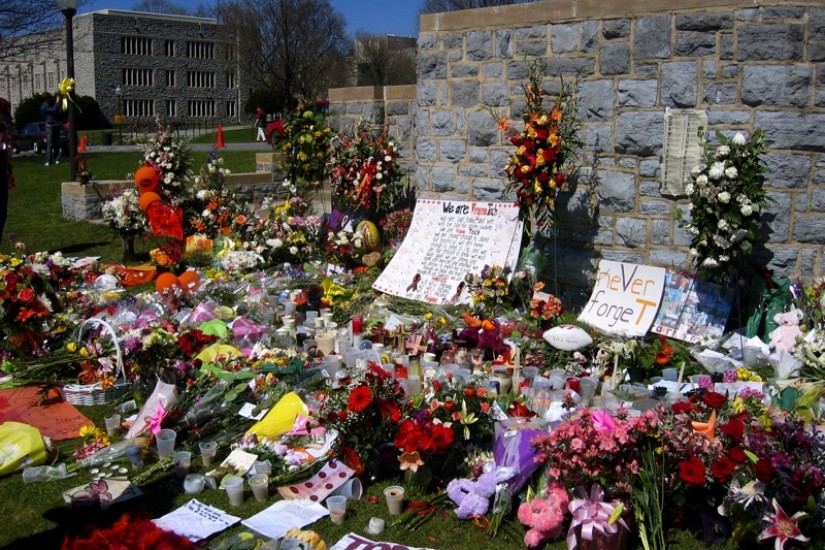 A memorial for the Virginia Tech massacre (2007).
flickr.com/maxpower
…

During the two decades after World War II, U.S. school shootings became more common, but mass shootings with double digit casualties were still unheard of. From war’s end through 1965, there were at least 29 school shootings. In most cases, one person died. Two died in 3 of the shootings.  The worst was 3 killed died in a 1960 Hartford City, Indiana, shooting. There was a single injury and no deaths in 7 of the 29 shootings during that period. In all, 28 died and 11 were injured in the 20 years following WWII.

And then came the 1966 clock tower shooting at the University of Texas.

On the morning August 1, 25 year old UT engineering student Charles Whitman knifed his mother and wife to death. He then ascended the campus observation deck on the tower’s 28th floor and began shooting a rifle. Over the next 96 minutes, he killed 17 people and wounded 31, with three of those soon dying from their injuries.

At the time, Whitman’s rampage was seen as a horrific outlier. However, we can now look back and recognize it as the first episode in the current plague of school shootings, much like an early case of disease years before it turns into a full fledged epidemic. The similarities are obvious. A heavily armed student went to school and killed as many people he could. Whitman was so effective that his atrocity remained the deadliest college shooting until the 2007 massacre at Virginia Tech University.

After Whitman, the steady flow of spontaneous school shootings and acts of revenge were occasionally punctuated by more mass shootings.

Just two years after the University of Texas massacre, an 18 year old Mesa, Arizona admirer of Whitman took seven hostages at the Rose-Mar College of Beauty and shot all of them in the head. Five died, including a 3 year old girl. Another baby he shot survived.

But most mass school violence of the 1960s-70s was actually the work of the military and law enforcement officials waging overt government violence against student protesters in the Civil Rights and anti-Vietnam War movements.