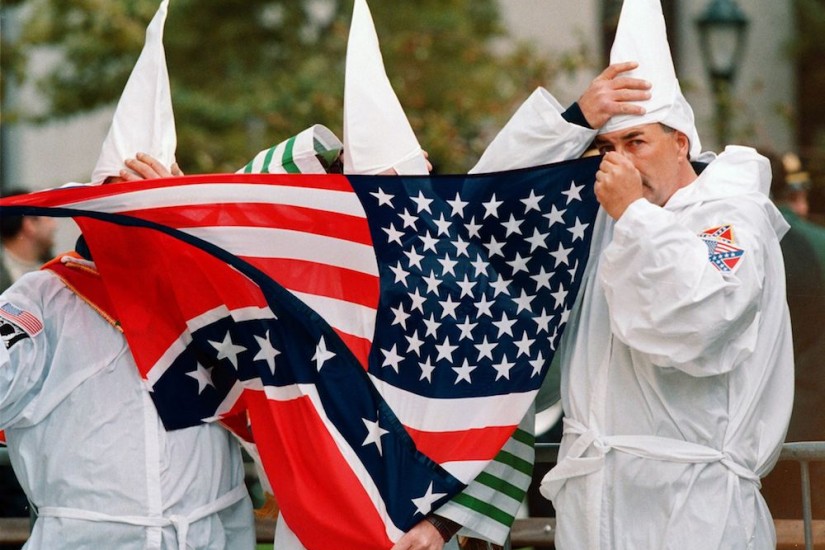 Three members of the Ku Klux Klan hide behind a combination of Confederate and American flags in New York, Oct. 23, 1999.
Doug Kanter/AFP/Getty Images
…

Meticulously researched and powerfully argued, Belew’s book isn’t only a definitive history of white-racist violence in late-20th-century America, but also a rigorous meditation on the relationship between American militarism abroad and extremism at home, with distressing implications for the United States in 2018 and beyond. Two fundamental insights underpin the book: first, that there exists a profound relationship between America’s military violence and domestic right-wing paramilitary organizations, and, second, that the character of that relationship underwent a decisive change in the late 1970s and early ’80s.

Foreign wars, like racial violence at home, are recurrent features—one might even say defining ones—of the American story, and Belew notes that spikes in domestic white-supremacist terrorism have regularly followed the close of major military hostilities. From the Reconstruction-era Ku Klux Klan to the activities of the “second Klan” in the 1920s to the violence against the civil-rights movement in the 1960s, Belew observes that “after each war, veterans not only joined the Klan but also played instrumental roles in leadership, providing military training to other Klansmen and carrying out acts of violence.”

These militants presented their activities as essentially reactionary—aimed at rolling back gains in minority rights—but they also, in most cases, understood them to be a kind of vigilante supplement for preserving the hierarchical social order of the militarized American nation with which they identified. Belew argues that from the late 1970s onward, however, this attitude changed. Unlike previous racist violence, a new strain of white militancy emerged after Vietnam that was not conservative at all: It envisioned overthrowing the state and entertained the idea of founding an all-white homeland and participating in outright genocide. As Belew documents, this new ideology proved so effective at attracting adherents and fostering coalitions that it can be seen as constituting a new social movement: white power. Over and against the attitudes and positions designated by the terms “white nationalism,” “white supremacy,” or even the “racist right,” “white power” came to represent something far more specific: a radical, well-organized movement of hard-core militants on a mission to turn the nightmare dystopia depicted in The Turner Diaries into a reality.

What triggered this shift? Belew argues that the precipitating event was the Vietnam War itself, not just in terms of what individual veterans experienced, but also what the war came to mean.