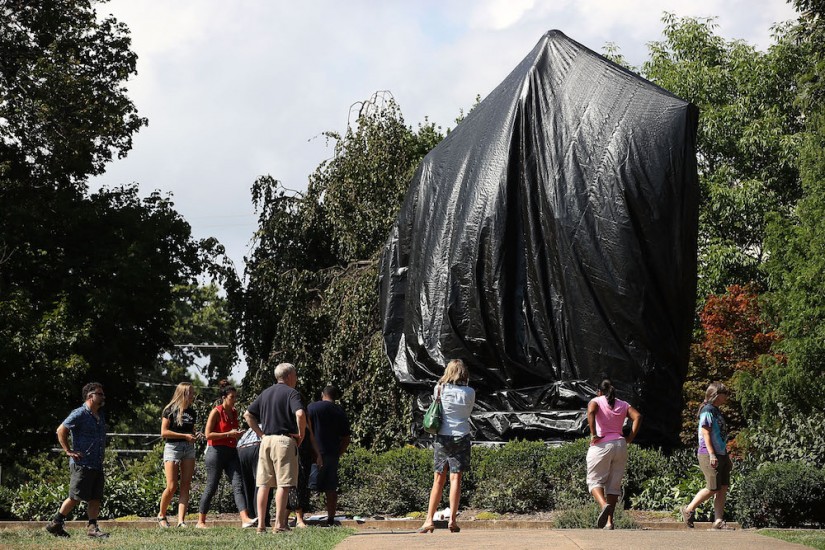 A black sheet was put over the statue of Confederate General Robert E. Lee in Charlottesville, Virginia on August 23, 2017.
Mark Wilson/Getty Images
…

The expectation that figures from the distant past should adhere to the enlightened mores of our own time is a very new thing. At its most benign – my daughter’s wish that Douglas Bader had a dog called Rover – it is a good-hearted and understandable wish that the past had been less racist and more liberal, less cruel and more progressive, more like us. But at its virtue-signalling worst, such as the call in the Guardian for Nelson’s statue to be removed from Trafalgar Square because the saviour of this nation was a “white supremacist”, it can seem stark raving bonkers – an attempt to make the past historically correct or wipe it from existence.

And now the virus is everywhere – from Oxford University, where activists shook their fists at a statue of Victorian colonialist Cecil Rhodes, to every corner of the United States, where dozens of monuments to the Confederacy were torn down or removed or covered up in 2017.

Undoubtedly some of these rebel statues, like the one of General E Lee in Charlottesville, Virginia, had become emotive magnets for neo-Nazis. But the vast majority of them, like the plaque in Brooklyn that marked a tree planted by Robert E Lee before the Civil War began, were harmless historical artefacts. In the age of historical correctness, it suddenly didn’t matter. From sea to shining sea, the rebel monuments came down. In Durham, North Carolina, protesters tore down a statue of an unknown Confederate solider and then stamped and spat on it, as if they were expunging racism itself from our wicked world.

Most of these Confederate monuments had been in their little corner of America for so long that they had gone green with age and had never been controversial. But in Trump’s bitterly divided America, symbols of the slave owning southern Confederacy have become as emotionally charged as Nazi swastikas.