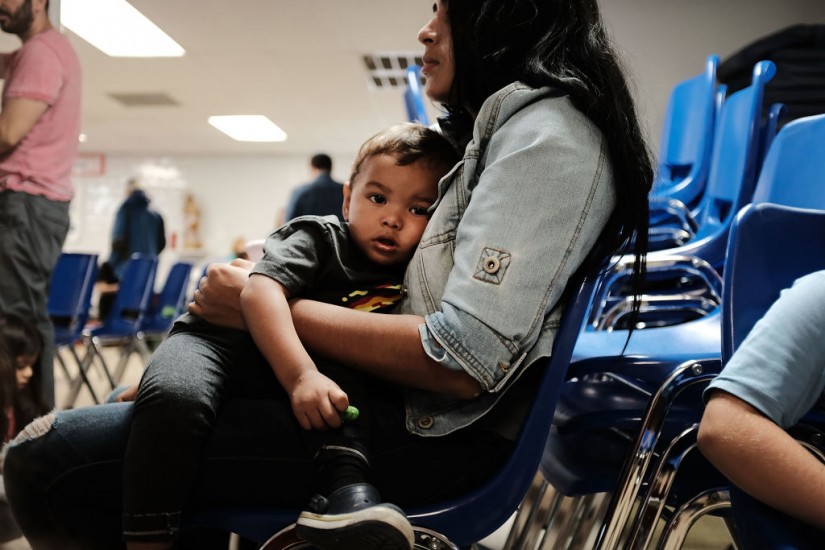 A woman sits with her son at the Catholic Charities Humanitarian Respite Center after crossing the U.S., Mexico border on June 21, 2018 in McAllen, Texas.
Spencer Platt/Getty Images
…

Many liberals appear to think that we had a relatively humane immigration enforcement system before Trump took office. In fact, Presidents Clinton, Bush, and Obama thoroughly militarized the border (including constructing hundreds of miles of a wall), nearly quintupled the size of the Border Patrol, and constructed a mercilessly smooth system linking the mass incarceration to a terrifyingly gargantuan deportation pipeline.

Perhaps the most bizarre thing about the debate over Trump’s immigration policies, which has centered on the Dreamers and the insistence on funding for his “big, fat, beautiful wall,” is how it has recapitulated the basic immigration policy framework under his two most recent predecessors. Trump’s demand has been this: legal status for DREAMers must be accompanied by the elimination of the diversity visa lottery, sharp limitations on the priority given to reunifying families in awarding visas for legal immigration, and, of course, $25 billion for his wall, since Mexico apparently doesn’t want to pay for it.

Many Democrats have rejected this, which is good. But it all obscures an important historical irony: combining legalization measures with deportation and border enforcement crackdowns (along with a larger supply of second-class guest workers for profiteering businesses) is precisely the mainstream, bipartisan establishment framework for immigration “reform” that guided a) repeated and failed legislation under Bush and Obama and b) executive enforcement actions under Bush and Obama.

After Trump took office, apprehensions of unauthorized border crossers sharply declined, leading the president to eagerly take credit: his tough talk had accomplished what his soft-spoken predecessors could or would not. But the celebration was premature. The number of crossings, as measured by apprehensions, soon began to rise again, despite Trump’s best efforts. It’s part of a longstanding pattern: immigration crackdowns mollify nativists in the short term but ultimately fail to accomplish their stated objective, leading to further calls for even harsher crackdowns.