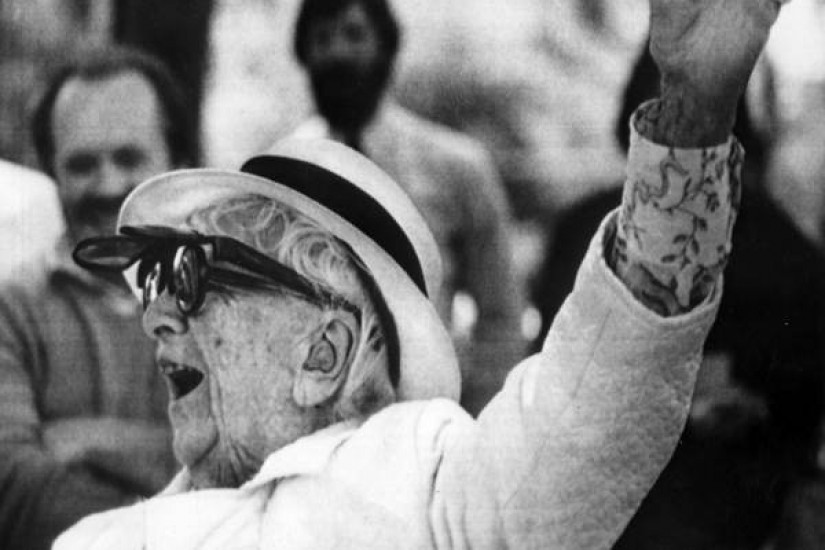 Marjory Stoneman Douglas photographed at the naming of the Department of Natural Resources administration building in her honor on April 4, 1985.
flickr.com/floridamemory
…

Now Mrs. Douglas has left us. The death of a 108-year-old woman shocks no one. And those who knew her, and who loves the Everglades, knew this day, as surely as the dusk, was coming. Still, it stings more than I thought it would.

She was our Joan of Arc. Tiny and frail, with a straw hat atop her head, and a strand of pearls around her neck, Douglas could be counted on to stand in defense of the Everglades. She spoke with the moral authority of someone who knew herself, who knew what was essential and what was right and didn't care what anyone thought once she had made up her mind. The Everglades were worth saving. And that was that.

As a young woman, she enjoyed driving out the new Tamiami Trail with friends and picnicking where the highway ended in the sawgrass. But she was no sportswoman. She didn't hunt or fish or canoe or camp. She hated the heat and the mosquitoes, much preferring the sound of ice rattling in a glass of scotch.

Yet she valued the 'glades for the beauty, for the birds and the water, the lifeblood of South Florida.  A talented reporter, Douglas — who learned her craft at her father's newspaper, the “Miami Herald” — was the perfect person to write a classic.

“There are no other Everglades in the world,” was the first line in her remarkable book. The year was 1947, and the federal government had just opened the national park. Federal engineers, at the urging of Florida officials, were beginning a massive project to drain the 'glades forever. Another federal project was in the works to floodproof the beginning of the Everglades system, the meandering Kissimmee River, by straightening it into a canal.

The importance of Mrs. Douglas' book was that she recognized the Everglades as more than a “swamp.” Swamps are easier for politicians to destroy than “rivers,” a word that connotes moving water and life. Educating the public about an uncommon river of grass was a public relations coup.