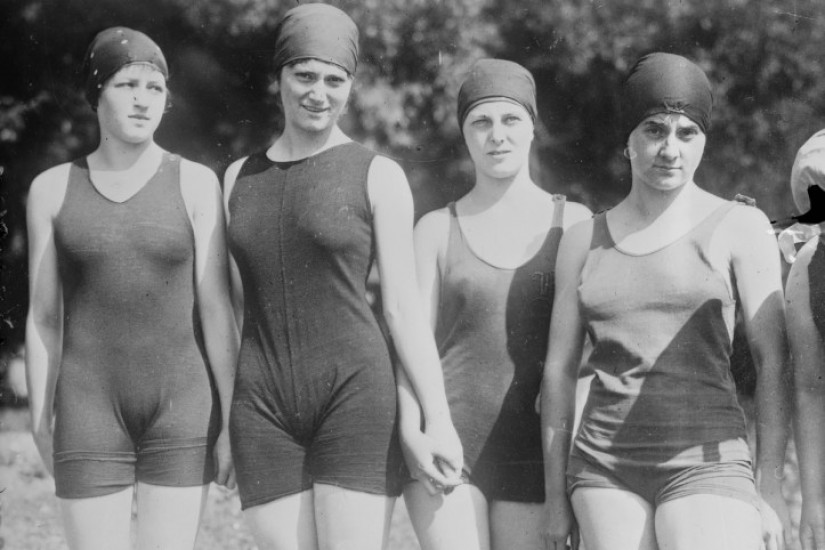 The bathing suit portion of the Miss America pageant dates back to 1921 in Atlantic City, a seaside resort. The competitive lineup of “bathing beauties” on the boardwalk marked the apotheosis of consumer culture and its mixed legacies for women. Though a long way from the Early Republic’s patriotic parades featuring women as allegories of Liberty and Columbia, it did have a nationalist and political subtext. Historian Kimberly Hamlin argues that the sashes derived from the suffrage movement and its own public parades.

Above all, the birth of Miss America capitalized upon the revolution in women’s swimwear that occurred in the early twentieth century. Earlier generations of American women went to the beach in bathing dresses. They wore long, loose gowns made of heavy material that “ballooned out from the body” when wet. The bathing dress was meant for passive wading at best. Female beachgoers weren’t supposed to swim. A circular logic claimed that women were too naturally weak and physically frail to swim, thereby keeping them out of the water where they might develop swimming skills.

In fact, the wool skirts of a bathing dress would tangle around a woman’s legs and even drag her underwater in a strong current if she tried to swim in them. Women’s death rates from drowning were alarmingly high in the nineteenth century. This eventually inspired campaigns to teach women to swim, as a public safety concern. As with the contemporary bicycle craze, women cited their health as a reason to revise gender restrictions. The emergence of women’s collegiate sports and of female professional athletes, like Australian swimmer Annette Kellerman, encouraged the cultural acceptance of women’s greater physical activity.

Women needed new attire to be mobile. Thus Kellerman not only wrote a book, How to Swim (1918), but designed her own line of swimsuits. The one-piece “Kellerman” had a scooped neckline and ended in shorts above the knee. Yet feminine modesty remained a consideration. Long before the Cold War invention of the bikini and language referring to attractive women as “bombshells,” female sexuality on display was deemed titillating and dangerous. Swimming pools designated “ladies’ only” days and times to contain the spectacle of the new, body-conscious swimsuit.