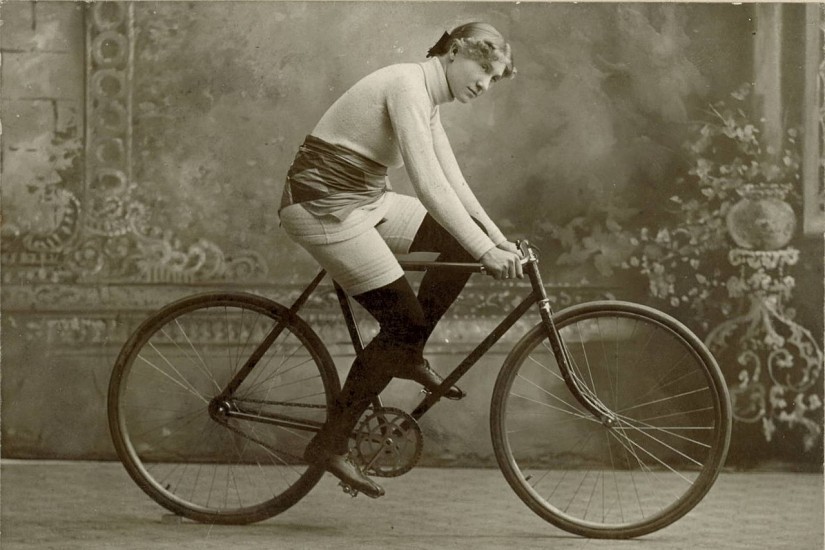 “The men’s races were more working-class, cigar-chomping affairs, whereas women’s races would attract the mayor, society people, women, and families,” Gilles says. (Although there was still plenty of betting.) “I think it helped a lot to develop what arena sports could be in America…These women need a place in history.”

Among the professional women racers of the 1890s, Anderson was undoubtedly the best. Over the course of her seven-year career, she entered 120 races and won all but 11. Newspapers and promoters played up rivalries between the racers, such as Farnsworth and Lizzie Glaw, but Anderson’s mix of professionalism and fitness helped her to dominate. Although she was sometimes ridiculed for it, Anderson was among the first to train systematically by taking regular training rides, lifting weights, and watching her diet to maximize performance. She was competitive and stoic, leaping up valiantly after crashes, and sported a Muhammad Ali–like swagger about her strength and abilities—couched, naturally, in prim Victorian parlance.

“Three years ago I was very fat in the legs, almost as much so as Miss Peterson, one of my competitors in the St. Louis race, is today,” Anderson told the St. Louis Republic in 1897. “My muscles were not at all developed, though it was but a short time when the fat began to peel off and give way to sinewy strength.”

Anderson also had the advantage of a trainer, fellow bike racer and future husband Phillip Shoburg, who recognized her talent and quit his own career to support hers. Shoburg helped her schedule races, secure lucrative sponsorships, tune her bike, and pace her on training rides. Between her prize money and sponsorships, Anderson was making between $5,000 and $6,000 a year, the equivalent of $140,000 to $160,000 in today’s dollars. But not everyone thought this line of work was becoming of a woman.

“The popular reception was unambiguous—they loved it,” Gilles says. “Thousands and thousands of people went to these races and they had no problems whatsoever. But just like today, the pundits—or the vocal minority—were holding on to these mores and values of a Victorian era and trying to steer people against it.” Some of Anderson’s own friends wouldn’t speak to her after seeing some of the scandalous outfits the women racers wore—long tights, clingy shorts, and curve-skimming sweaters. “Oh, they really thought I was wicked,” she once said.

…
View on Outside
View Connections