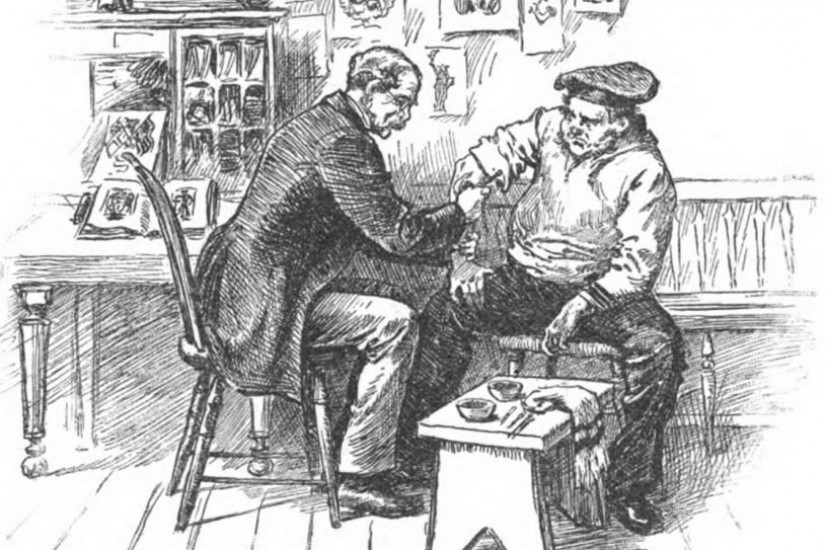 A number of the recruits sported anchors, the tattoo most quintessentially associated with sailors. While some in this group were former seamen, others such as 20-year-old Laborer Martin Auction and 25-year-old Machinist John Reilly had also selected this design, suggesting it held wider appeal. Aside from hearts, other symbols of love and lust included the women former fireman Peter Cahill carried on each arm, and the woman with the initials ‘I.C.’ that William McNally kept on his body.

Aside from a glimpse into the social side of Irish-born naval recruits, the tattoos also reveal another important outlet for the male Irish community of New York- the Fire Service. Four of the men had tattoos that appear to represent active Engine Companies in the city. These private companies competed with each other to put out blazes, often coming to blows as a result. They also played an important role in city politics, and many Irish Democrats sought to further their political ambitions through membership. 16-year-old William Carter had the number ‘12’ on his arm, probably representing the engine known as ‘Knickerbocker’, located at 112 East Thirty-Third Street, near Third Avenue. Fireman Patrick Holden had a tattoo of the number ‘13’. Engine 13, known as ‘Eagle’, lost their premises at the corner of Church and Vesey Streets in 1863, putting the company out of operation for two years. It is likely this event that inspired Holden’s enlistment in the navy. 22-year-old Laborer William Wogan wanted people to be in no doubt that his tattoo declared affiliation to a company. His ‘17’ was accompanied by the name of the engine ‘East River’, which was based at Goerck Street and served the Sixth and Seventh Districts.

Details of these tattoos are only preserved as they were recorded by the Naval Rendezvous recruiters. There is no doubt that large numbers of working class men, particularly from cities like New York, went into all theatres of the war wearing tattoos. Rolling up the sleeves of men in units like the New York Fire Zouaves would undoubtedly have been akin to reading a record of their allegiance. From an Irish American perspective, their tattoos reveal something of how these men led their lives- their beliefs, their romances, their loyalty and perhaps also their attempts to integrate into the society around them.