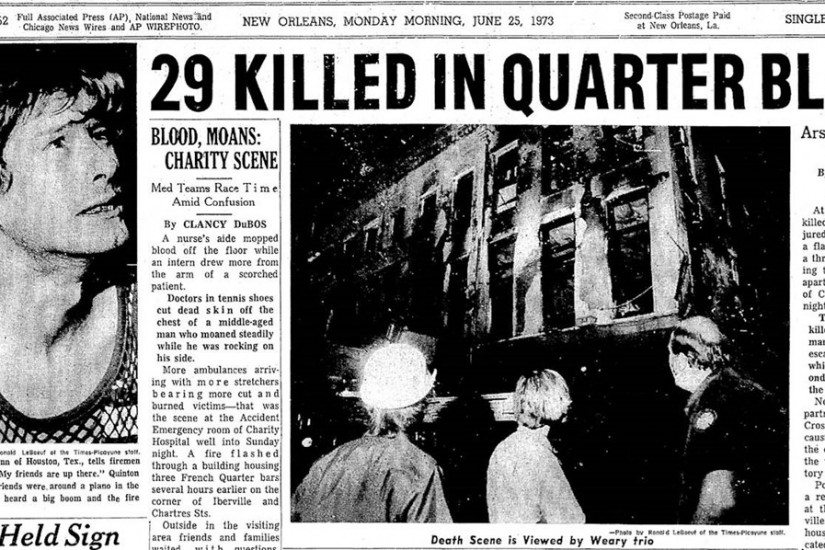 In a funeral home on the edge of the French Quarter, 12-year-old Patrick Schoen refused to accept his cousin’s dare to look inside the body bags that were lined up in the carriageway of the family business. His cousin was an embalmer, and the funeral home had received dozens of anonymous bodies of men who had died in an arson attack on a gay bar, the UpStairs Lounge, in New Orleans on June 24, 1973. Before the Orlando mass shooting in 2016, it had been the largest massacre of gay people in U.S. history, leaving 32 dead and 15 injured.

The history of this massacre has only been recently documented. I first came across details of it in 2006 when reading through brittle copies of 1970s newspapers at the William Way Community Center in Philadelphia, the only place that held gay sources in the city. I remember seeing a headline about a “blaze” in New Orleans that reporters compared to the Holocaust; but in 2006, there were no books at the Philadelphia Public Library about it, nor were there articles in the scholarly databases at Princeton, where I was teaching. In fact, in 2006, Google was in its infancy, and it produced no hits.

I continued, however, to read through surviving copies of the Advocate, the largest gay newspaper in the 1970s, and pieced together the chronology of the massacre, trying to understand why it had been forgotten. I soon realized that the chilling mortality rates that the HIV/AIDS epidemic caused in the early 1980s overshadowed the UpStairs Lounge massacre. Also, as I continued reading through gay newspapers, I found many other alarming examples of anti-gay violence. In the span of a less than a year, headlines in the Body Politic, a popular gay newspaper, read “Thugs Terrorize Parks,” “Three Murders Unsolved,” and “All Faggots Should be Castrated.” The attack on the UpStairs Lounge was absolutely horrific, but in the 1970s, it ranked as yet another example of the violence that undermined the decade of so-called liberation.
…
View on Slate
View Connections