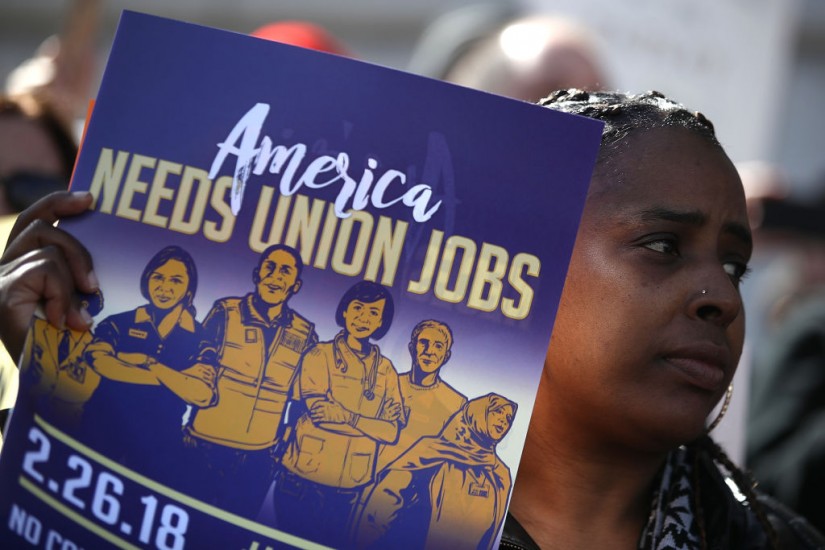 A union member at a rally outside of San Francisco City Hall on February 26, 2018, as the US Supreme Court heard oral arguments in Janus V. AFSCME.
Justin Sullivan/Getty Images

Draining union finances will not be the most significant outcome of the Supreme Court’s decision in Janus v. AFSCME. It poses a serious threat to our democracy, which Trump and his right-wing enablers have already put in peril.

To be sure, Janus will hurt unions, as the anti-union Liberty Justice Center and the others who funded the plaintiff’s case intended. Today, nearly half of all union members work for a government, and the vast majority live in states where, prior to the Court’s decision, unions were able to collect representation fees from all those for whom they bargained. Anti-unionists are already encouraging those workers to opt out of paying fees. Worried unions with large public-sector memberships began cutting staff and budgets months ago, putting efforts like the fast food workers’ Fight for $15 on life support. As these cutbacks suggest, public-sector unions are not the only victims of Janus. It will further erode worker bargaining power in an economy where more than half the national income already goes to the top 10 percent of earners.

Yet Janus constitutes an even more significant setback—for democracy.

New Dealers embraced that logic. When Senator Robert Wagner drafted the National Labor Relations Act in 1935, he believed collective bargaining was “at the heart of the struggle for the preservation of political as well as economic democracy in America.” That wisdom also guided those who extended union rights to government workers in the 1960s. Denying civil servants the right to bargain collectively was “more fitting to a benevolent despot than to the world’s greatest democracy,” as one reformer, Wilson R. Hart, put it.

The reasoning of these reformers was sound. As workplace democracy expanded, so did political democracy. Racial, age, gender, and income restrictions on the electorate all fell as collective bargaining spread.

Yet in the middle of the last century, the tide began turning against the mutually reinforcing expansion of the two forms of democracy.