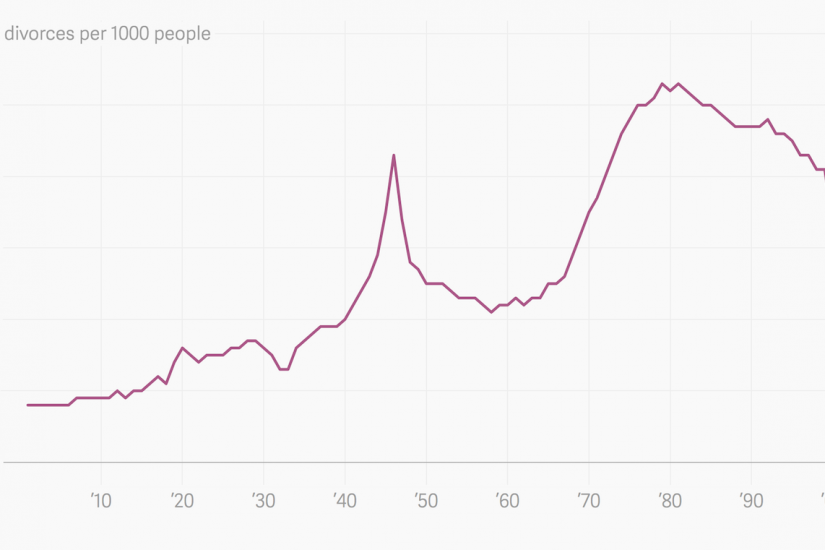 The end of World War II marked the beginning of beautiful love stories for thousands of US couples, as sweethearts who’d deferred marriage during the war rushed to wed in peacetime.

But 1946 is also the year of a demographic blip often overlooked in the history of postwar America: an unprecedented spate of divorces.

A look at US marriage rates in the 20th century shows how history influenced couples’ decisions to wed. The marriage rate declined during the hardship of the Great Depression. It spiked upon US entry into World War II, with couples marrying (sometimes rashly) before the husband shipped off overseas. “It’s a great line if you’re a guy: ‘Hey baby, I’m gonna go fight Hitler. Want to get married?” said Nick Wolfinger, a professor of family and consumer studies at the University of Utah. (As data scientist Randal Olson has pointed out, there was a similar uptick in US weddings at the start of World War I.)

Marriage rates stayed low during the years of the conflict, then soared again immediately after the war’s end in 1945—leading to the “baby boom” that would reshape US society for generations to come.

Divorce likewise tapered off during the Depression, when few people had the resources to make any substantial life changes. But although World War II put a halt on decouplings, soon after there was a huge spike in divorces that would remain unmatched in US society until those baby boomers grew up and decided to exit their marriages at unprecedented rates.

The war brought many couples together, but it also drove many apart. The stress of deployment strained some fragile partnerships to the breaking point. Wives left husbands for new partners they met while their spouse was overseas. Husbands left wives for the English or German girlfriends they’d met on deployment.

And many of those couples who married hastily in a fervor of patriotism, romance, or some other desire before the war sobered up to realize that they really weren’t that compatible after all.