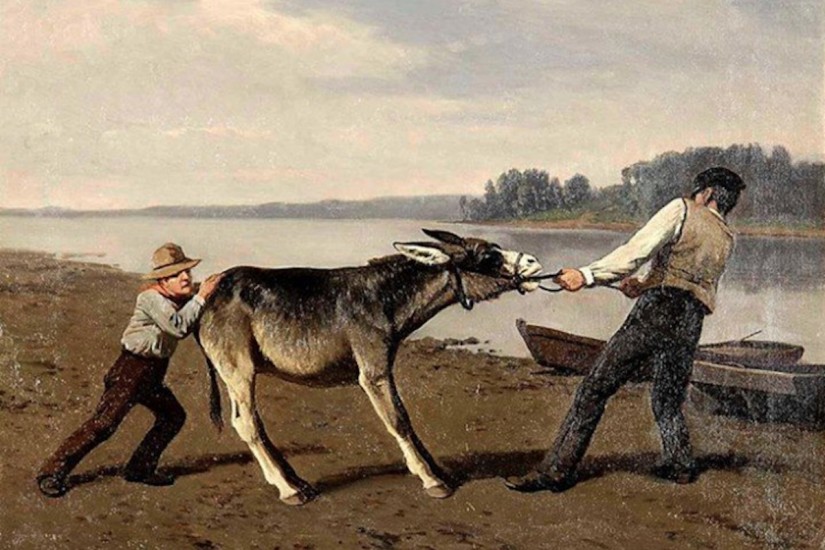 "The Stubborn Mule." A mule-donkey hybrid has long been the mascot of the Democratic Party (1881).
Hermann G. Simon/American Gallery
…

What we need, ultimately, is to encourage the rise of New Old Democrats.

Here’s the old part: reclaiming a willingness to take energetic government action when the circumstances call for it, based on a respect for the free market but also a recognition that the free market alone will not serve the public interest without checks against abuse, corruption, and unacceptable levels of inequality. Roosevelt knew this as well as anyone. My hero Hubert Humphrey, another son of Minnesota, knew this too. They saw that public policy can solve these problems—that the rise of inequality and the loss of mobility is not chiefly a story of abstract “market failures,” but of self-serving actors intentionally distorting markets, and government failing to stop them.

Here are the new parts:

We need to marry the principles of Roosevelt and the ambition of Johnson with updated understandings of how the job market works, how families live, and how corporate and political power are exercised in the globalized, technology-driven landscape of the twenty-first century.

We also need a new mission. For Roosevelt, the fight was economic depression. For Johnson, it was a war on poverty. Today, it has to be rescuing and rebuilding the American middle class. Since 1971, the percentage of both upper-income and lower-income households in this country has increased, hollowing out the middle class from 61 percent to below 50 percent of all households. Meanwhile, the share of aggregate income going to middle-income households fell by roughly a third in that same period. To be clear: This does not mean giving up on the fight against poverty. We have made real progress since the Great Society, and we have to finish the job—especially ending child poverty. But the state of our country’s middle class itself has been distinctively and gravely hurt in recent years. And this hollowing out has sapped our national vitality and eaten away at our national unity. As my former boss Joe Biden often says, “Middle class is not a number. [I]t is a value set.” A vibrant middle class reflects our national values and makes them more secure. This is why it demands a special focus.

And finally, we need new policy solutions, not just more of the same. When Roosevelt launched the New Deal and Johnson the Great Society, they were not relying on old proposals to recreate an old world.