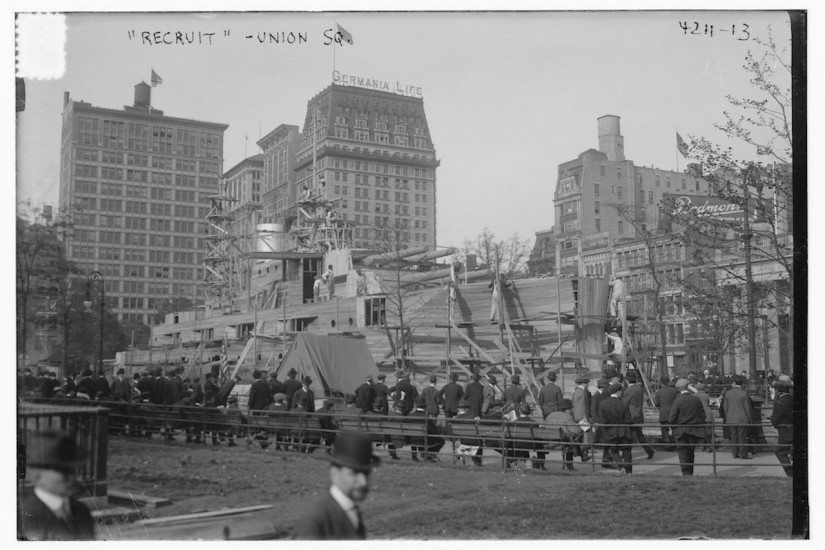 The USS Recruit under construction in Union Square (1917).
Library of Congress

In 1917 the U.S. Navy built a full-size battleship in Union Square, New York. It would stay there for the next three years.

Intended as a recruitment and training center, the ship was commissioned as a normal seagoing ship, under the command of Acting Captain C. F. Pierce, and manned by trainee sailors from Newport Training Station. Internally the ship had a wireless station, full officer's quarters, doctor's quarters and examination rooms to assess the health of potential candidates.

According to the August 1917 edition of Popular Science, the Recruit followed the normal navy routine. Sailors rose at 6 a.m., scrubbed the decks, did their laundry, and attended instructional classes. They then stood guard over the ship and were available to answer questions from visitors. By night, all the ship's lights were turned on, including a series of searchlights.

The ship hosted a variety of social events and receptions, including a christening, patriotic speeches and visits by various dignitaries, a group of Native Americans and the woman's motor corps.

As a recruiting tool the ship was very successful, helping to recruit 25,000 men into the U.S. Navy.

The First World War ended in 1918, and by 1920 the Recruit was no longer needed in Union Square. It was properly decommissioned and dismantled, with the intention of relocating it to Coney Island's Luna Park. This did not happen and the fate of the Recruit is unknown.