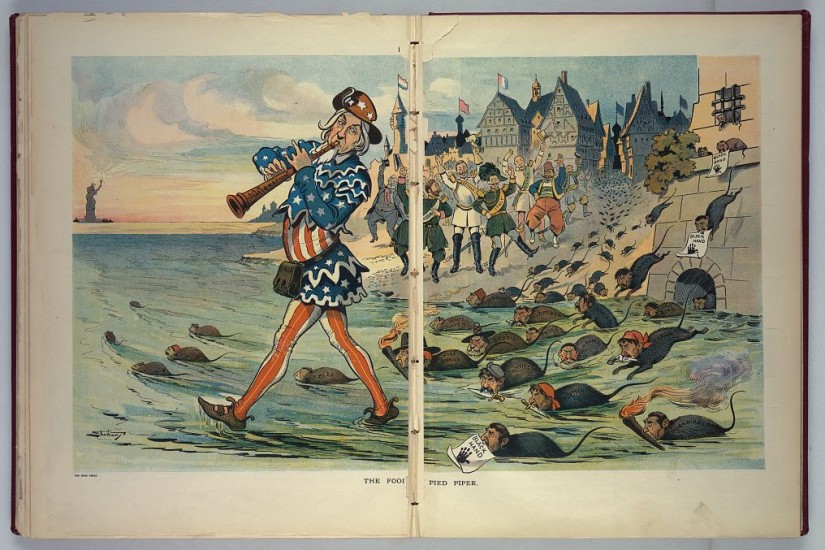 "The fool pied piper," a political cartoon that suggests a lack of restrictions on immigration to the U.S. would bring many undesirable people to the country (June 2, 1909).
Samuel D. Ehrhart/Library of Congress
…

Eugenics (meaning “well-born”) was first coined in the work of statistician and geographer Francis Galton in 1883 “to express the science of improving stock, which is by no means confined to questions of judicious mating but which, especially in the case of man, takes cognisance of all influences that however remote a degree to give to the more suitable races or strains of blood a better chance of prevailing speedily over the less suitable than they otherwise would have had.”

Proponents of eugenics advocated “positive eugenics” (encouraging physically and intellectually “fit” classes of society to marry and have more children) and “negative eugenics” — or policies intended to limit the nuptiality and fertility of “eugenically unfit” classes (including sterilization and euthanasia). By the end of the nineteenth century, eugenics was a transnational discourse which translated into policies in spaces as diverse as the Ottoman Empire, Brazil, China, Puerto Rico, and Germany. Certainly, public discourse and policy on immigration in the US, Canada, and Australia were indelibly shaped by eugenics.

Francis Galton himself claimed that the “ablest race” — the ancient Greeks — maintained their fitness because “Athens opened her arms to immigrants, but not indiscriminately. For her social life was such that none but very able men could take any pleasure in it.” Eventually, eugenics provided what appeared to be a “scientific rationale” for justifying and amplifying anti-immigrant sentiment.