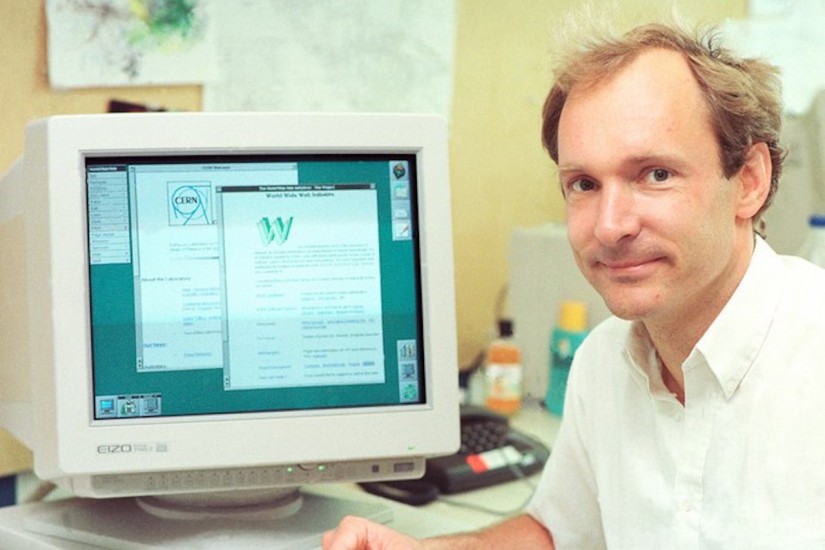 Tim Berners-Lee at his workstation in 1994.
European Organization for Nuclear Research (CERN)
…

At 63, Berners-Lee has thus far had a career more or less divided into two phases. In the first, he attended Oxford; worked at the European Organization for Nuclear Research (CERN); and then, in 1989, came up with the idea that eventually became the Web. Initially, Berners-Lee’s innovation was intended to help scientists share data across a then obscure platform called the Internet, a version of which the U.S. government had been using since the 1960s. But owing to his decision to release the source code for free—to make the Web an open and democratic platform for all—his brainchild quickly took on a life of its own. Berners-Lee’s life changed irrevocably, too. He would be named one of the 20th century’s most important figures by Time, receive the Turing Award (named after the famed code breaker) for achievements in the computer sciences, and be honored at the Olympics. He has been knighted by the Queen. “He is the Martin Luther King of our new digital world,” says Darren Walker, president of the Ford Foundation. (Berners-Lee sits on the foundation’s board of trustees.)

Berners-Lee, who never directly profited off his invention, has also spent most of his life trying to guard it. While Silicon Valley started ride-share apps and social-media networks without profoundly considering the consequences, Berners-Lee has spent the past three decades thinking about little else. From the beginning, in fact, Berners-Lee understood how the epic power of the Web would radically transform governments, businesses, societies. He also envisioned that his invention could, in the wrong hands, become a destroyer of worlds, as Robert Oppenheimer once infamously observed of his own creation. His prophecy came to life, most recently, when revelations emerged that Russian hackers interfered with the 2016 presidential election, or when Facebook admitted it exposed data on more than 80 million users to a political research firm, Cambridge Analytica, which worked for Donald Trump’s campaign. This episode was the latest in an increasingly chilling narrative. In 2012, Facebook conducted secret psychological experiments on nearly 700,000 users. Both Google and Amazon have filed patent applications for devices designed to listen for mood shifts and emotions in the human voice.

For the man who set all this in motion, the mushroom cloud was unfolding before his very eyes. “I was devastated,” Berners-Lee told me that morning in Washington, blocks from the White House. For a brief moment, as he recalled his reaction to the Web’s recent abuses, Berners-Lee quieted; he was virtually sorrowful. “Actually, physically—my mind and body were in a different state.” Then he went on to recount, at a staccato pace, and in elliptical passages, the pain in watching his creation so distorted.

This agony, however, has had a profound effect on Berners-Lee. He is now embarking on a third act—determined to fight back through both his celebrity status and, notably, his skill as a coder.