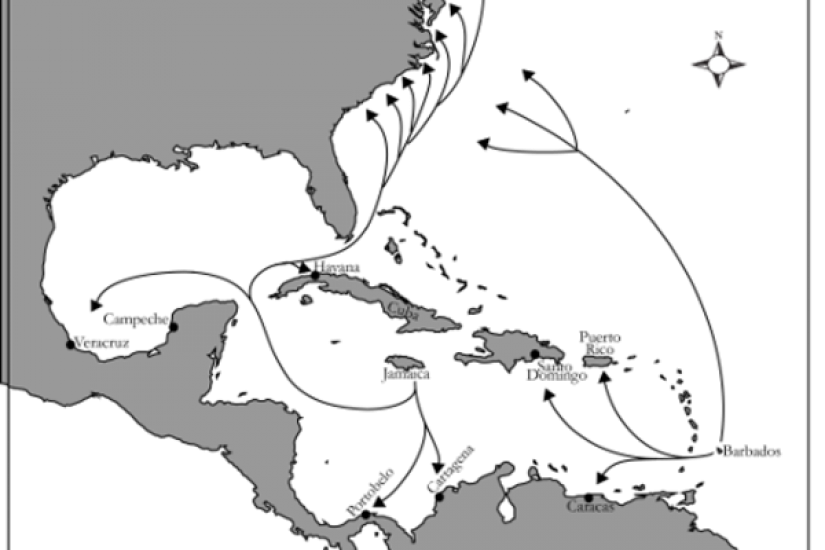 The colonies of Barbados and Jamaica were the major centers of the British American trade, where slaves from Africa were reshipped to many locations in North, South, and Central America.
Greg O'Malley/UC Santa Cruz

Between the early 1500s and the mid-1860s, millions of Africans were captured, sold into slavery, and transported to the New World to live out their days in bondage. The African diaspora is believed to have been the largest forced migration in human history, though “mass abduction” might be more apt. Nothing conveys the scale of it better than the Trans-Atlantic Slave Trade Database (TSTD). Hosted at slavevoyages.org, the TSTD provides details of almost 36,000 slave-trading shipments that took place over three centuries. It’s the most complete record we have of transoceanic slave routes and an essential tool for researchers. One prominent historian likened its impact on the study of slavery to that of the Hubble Space Telescope on astronomy.

But like the Hubble—before it was repaired by the crew of the space shuttle Endeavour—the TSTD suffers from a kind of myopia. True to its name, it only includes voyages that made the transatlantic crossing from Africa, the infamous “Middle Passage.” But slave shipping didn’t stop there. It continued full throttle on this side of the Atlantic, with thousands of vessels and voyages ferrying enslaved people to and from points within the Americas.

The TSTD isn’t alone in overlooking that second stage of slave shipping. “For a long time, most research on the American slave trade focused on the shipments coming into major slaveholding colonies, and those were almost all arriving directly from Africa,” said UC Santa Cruz associate professor of history Greg O’Malley. “It missed a big piece of the overall picture.”

The missing piece—the bustling intra-American slave trade—played a critical role in spreading slavery across the Western Hemisphere and embedding it deep in the economic and social foundations of the New World. To grasp the full scope of that commerce is to gain a broader understanding of the way slavery shaped life in the Americas, with repercussions that are still playing out today.