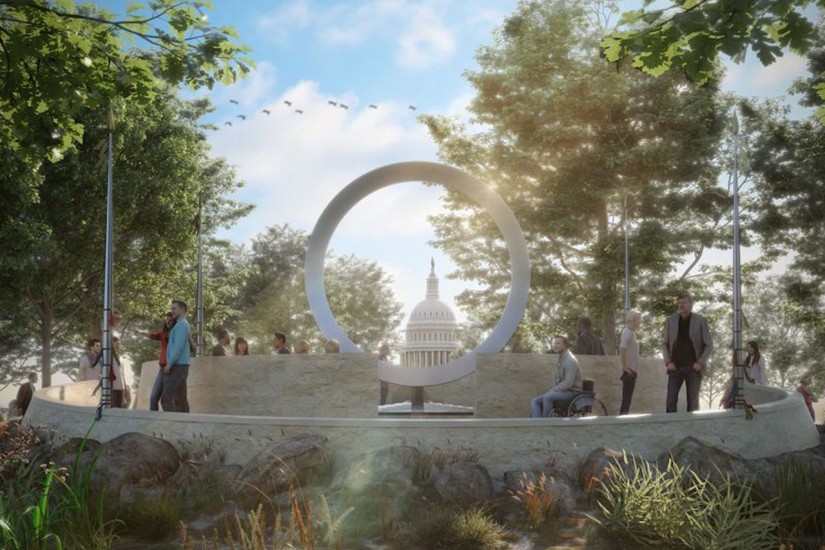 An advance rendering of the proposed "Warriors' Circle of Honor" memorial to honor American Indian veterans.
National Museum of the American Indian
…

Another memorial proposal featuring a prominent centerpiece is that of Harvey Pratt, which eschews the military emphasis of the star symbol at the core of Wellspring of Valor in favor of a simpler geometric form: the circle. A fixture in much Native American storytelling, the symbol of the circle—rendered in Pratt’s design in gleaming stainless steel—suggests the cycle of life and death, and the continuity of all things.

“On ceremonial occasions,” Pratt says, “a flame will be ignited at the base of the circle. Veterans, families and others are invited to ‘come to the campfire’ and tell their stories.” By situating the memorial to look out over the stillness of the nearby Chesapeake Bay wetland landscape, Pratt hopes to foster an environment of peaceful contemplation in which visitors can come together over the stories of those who have served—and share their own.

This storytelling space, which offers four arcing benches to visitors, is the inner of two concentric circles—beyond it lies a redbrick walkway, on which museumgoers can wander at their own pace and immerse themselves in the circular symbolism. Along this walk, symmetrically spaced, are four lances jutting skyward. While clearly emblematic of military courage, the lances serve another purpose: guests who wish to leave their mark on the memorial are invited to tie prayer cloths to them.

Beneath the steel circle, which Pratt calls the "Sacred Circle," is an “intricately carved stone drum,” which will convey the constant pulse of Native American spirit and sacrifice across the breadth of America’s history. It is not strictly somber in its symbolism, however—Pratt hopes visitors will seize on the silent rhythms of the memorial as an invitation to harmonize their experiences. “The drumbeat,” he says, “is a call to gather.”