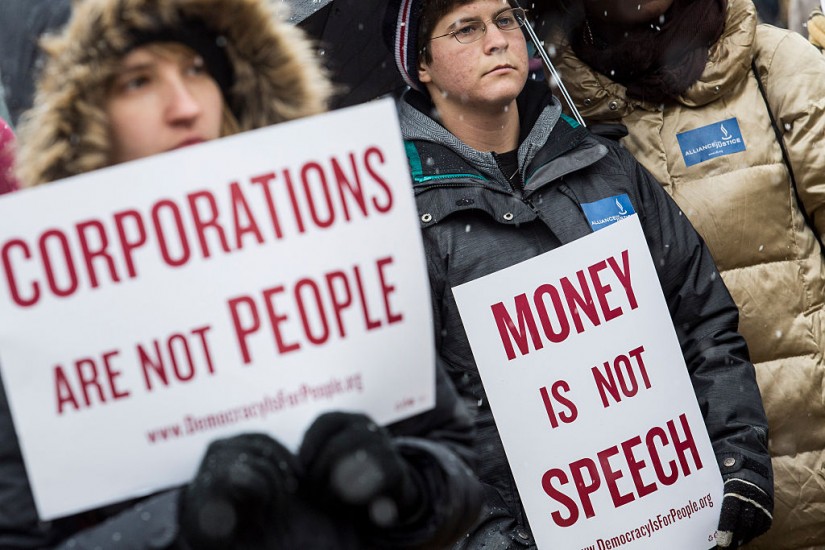 On the fifth anniversary of the Supreme Court's Citizens United decision, protestors call for an end to corporate money in politics outside the White House on January 21, 2015.
Drew Angerer/Getty Images
…

While not striking down limits on contributions to candidates, Citizens United held that the freedom of speech included the freedom to fund speech about candidates—and that people don’t lose their free-speech rights when they work together through the corporate form. Corporations have always been limited to pursuing the goals laid out in their charters, of course, but if they pursue those goals through speech, the First Amendment protects them.

This ruling came in a case where the Court could have rendered a much narrower decision. The case centered on a highly unusual circumstance in which a nonprofit group had made a documentary attacking Hillary Clinton but was prevented from showing it on pay-per-view and advertising it on television because a small amount of its funding had come from for-profit corporations. It also came just a few years after another case, McConnell v. FEC, that had upheld the very same limit on corporate spending. The Court’s ideological composition had shifted rightward in the meantime.

Citizens United also, though, eliminated a lot of uncomfortable tensions in the law. The previous regime had exempted media corporations—so a media company could say whatever it wanted about a candidate, but another corporation couldn’t buy ad space from that company to do the same. In oral argument before the Supreme Court, a lawyer for the government conceded the law would even allow for the banning of books (also known as the prototypical First Amendment violation), so long as those books promoted candidates and were funded with money from a corporation.

It also provides us a good opportunity to return to the question of the Founders and the text they enacted. As Winkler notes, the late Justice Antonin Scalia wrote a concurrence in the case arguing that the majority’s ruling was consistent with his originalist philosophy. We the Corporations doesn’t flesh out what Scalia said, though, so it’s worth doing here.

As mentioned above, there is no definitive evidence that the Founders wanted, or did not want, corporations to have constitutional rights. But Scalia laid out a strong case for piercing the veil—for seeing corporations as associations of rights-having individuals—and used considerable Founding-era evidence to make his point