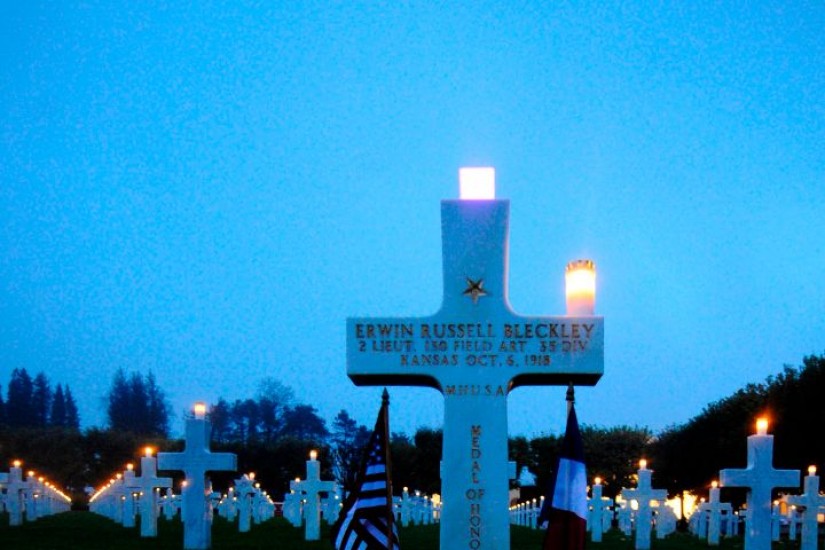 Headstones with lighted candles are pictured at the Meuse-Argonne American Cemetery and Memorial on November 11, 2017 in Eastern France.
Jean-Christophe Verhaegen/AFP/Getty Images
…

The American people celebrated the raw muscle that their country had displayed. The Chateau Thierry monument, near the site where the 3rd Infantry Division helped block one of the last German offensives and earned the nickname it bears to this day, “Rock of the Marne,” features an imposing eagle with the inscription “Time will not dim the glory of their deeds.” It is assertive and self-confident and thus different from the proud but somber French and British memorials of Verdun or the Menin Gate in Ypres.

But although these monuments were going up in the 1930s, they were accompanied by disillusionment and disgust with the war’s outcome. It had self-evidently proven not to be the war that would end all wars. It did not end power politics. It did not inaugurate an era of peace and brotherhood. It engendered no small suspicion that the government was controlled by cliques of warmongering economic interests. That suspicion helped produce the neutrality legislation that, in 1940, prevented the United States from rushing aid to a Britain now fighting for survival, alone. Above all, it convinced many Americans that they could, and should, withdraw behind their Atlantic and Pacific moats, and look to their own interests while the world went its own wicked ways.

The United States and the world paid a heavy price for those beliefs. A German victory in Europe was worth fighting to stop. It would have created an imperial power bound to clash with the United States, and indeed intent on so doing. It would have bred even more wars in its wake. The Versailles settlement of 1919 was flawed, but it was a remarkable achievement given the ruined world of 1918, and it could have been made to work—if the United States had displayed the statecraft that it did from 1945 to 1950. It chose not to. When Winston Churchill was asked during World War II what the conflict should be called, he replied: “The Unnecessary War.” American withdrawal from world affairs, and from concern with world order, helped create the conditions that made that second war possible.

There is a lesson here. And if the graves of the Meuse Argonne cemetery are not enough to make an American weary of global engagement reflect on that error, perhaps visits to the other resting places of American fallen in that second, unnecessary war—in Tunisia, or Italy, or Luxembourg, or England, or the Rhone Valley—will suffice.