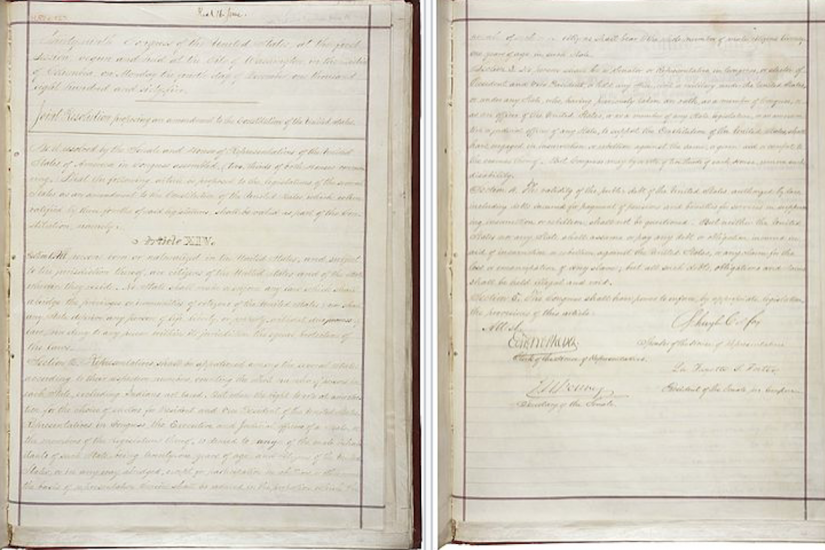 The two pages of the Fourteenth Amendment.
National Archives
…

Of course, the Warren Court of the 1950s and ’60s gave constitutional sanction to the civil-rights revolution. But, with the exception of overturning Plessy v. Ferguson, the decision upholding racial segregation, it did not directly confront the long train of decisions that restricted the 14th Amendment’s reach regarding blacks. Instead, it opted to work around existing jurisprudence. For example, in affirming the constitutionality of the Civil Rights Act of 1964, which barred discrimination by private businesses, the justices relied not on the 14th Amendment’s guarantee of equality but on the Constitution’s clause empowering Congress to regulate interstate commerce. The elevation of the commerce clause into a pillar of human rights in this and other decisions has made the judiciary look ridiculous. Everyone knows that guaranteeing the free flow of goods was not the motivation of those who took to the streets to demand passage of the Civil Rights Act, or of the congressmen who voted for it. The justices could not bring themselves to say that for 80 years the Court had been wrong. More recently, the Court has proved more sympathetic to white plaintiffs complaining of “reverse discrimination” because of affirmative-action policies than to blacks seeking assistance in overcoming the legacies of slavery and Jim Crow. The majority seems to feel that “racial classifications” pose the greatest danger to equality, not racism.

But there is another way of reading the 14th Amendment, one pioneered by the former slaves and their allies and articulated in legal terms by the country’s first generation of black lawyers, who challenged the emerging jurisprudence of the late 19th century. It is too often forgotten that, with one exception, the all-white Southern governments created by President Andrew Johnson after the Civil War rejected the 14th Amendment, making ratification impossible. Congress then required the creation of new ones in which black men voted in large numbers and held public office. These new governments ratified the amendment. In other words: No black suffrage in the South, no 14th Amendment. Yet when the Court has sought to construe the amendment’s purposes and meaning, the black voice is never heard.

The counter-interpretation developed in the 1880s and 1890s remains available today, certainly as plausible, if not more so, than existing jurisprudence. There is no reason, for example, why the “privileges or immunities” of citizens must remain a dead letter, why it cannot be understood to encompass rights not only denied by slavery but essential to full membership in American society, such as access to an adequate education. There is no reason why what the Court dismissively refers to as “societal racism” cannot be taken into account in assessing affirmative-action and school-integration programs, or why the “state action” doctrine must hamstring national efforts to protect the rights of Americans against violation by private parties.