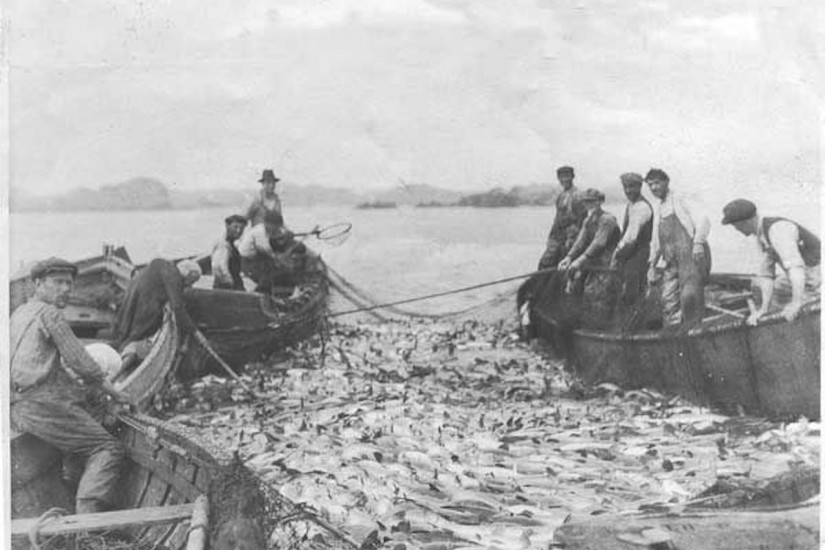 Cod fishing off the coast of Newfoundland, circa 1890.
Library of Congress
…

For decades, the New England fishermen had complained about the difficulties of fishing off Newfoundland. They would much rather fish fish than buy fish, they said, but they purchased the herring because the “natives” of Newfoundland forced them to. In popular publications and official government reports, 19th-century Americans described the Newfoundlanders in terms they usually reserved for darker-skinned people who lived in places the U.S. planned to invade and colonize: illiterate and half-naked subsistence farmers, incapable of understanding capitalism or accumulating wealth, who “flocked aboard” approaching U.S. vessels in the hopes of an invitation to dinner. They had to be watched while on board, American captains warned, lest they ransack the ship and steal whatever they could, and if the captains did not hire them to do the fishing, they would retaliate against vessels and crew. That was exactly what these captains alleged had happened in January 1878.

That winter was remembered on both sides as a bad one for the Newfoundland herring fleet—the fish were small and scarce, and unusually warm weather made it difficult to freeze them on deck. In December 1877, the first of more than two dozen Gloucester ships had arrived in Fortune Bay, in the island’s southeast. But the herring kept the fleet waiting: By Saturday, January 5th, there were still no fish in the bay. On the 6th, the herring appeared at last, and the Americans, eager to bring the first cargoes back to New England, began to lay their seines.

Witnesses on board the ships testified later that over two hundred Newfoundlanders “gathered on the beach and demanded that the seines be taken up, giving a pretext that it was unlawful to fish on the Sabbath.” This crowd then began, the Gloucester shipowner John Pew attested in a petition to the Treasury, “a war-like demonstration.” They overpowered the crews, tore up Pew’s seines, and liberated all the herring. Afterwards, the islanders made what one captain called a “jubilant demonstration” on the shore, “firing guns, blowing horns, and shouting, as if celebrating a victory.”