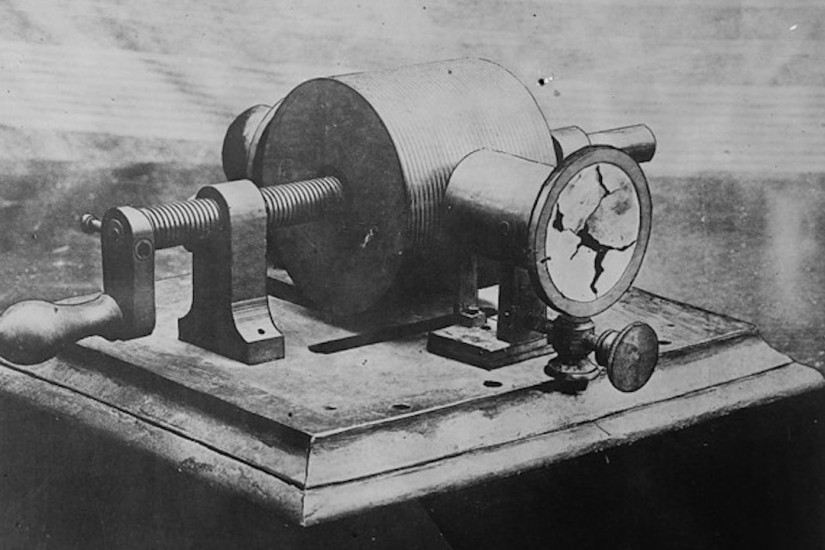 Mr. Graham Bell, of telephone fame, has made phonographs of far greater delicacy than any of the original instruments, while in England some noted experimenters have succeeded in doing wonders in the way of delicate apparatus. Mr. Edison took up the work where these had left off. In place of a sheet of tin-foil a sheet of prepared wax was adopted. The steel needle-point was retained for indenting the sheet, but for reproducing the sound it was found that an elastic splinter of bamboo, as fine as a hair, answered the purpose better, and made so little impression upon the wax as not to wear off its record. In place of a hand-crank to turn the cylinder an electric motor was introduced. Finally all parts of the machine were made with a delicacy and care not thought of ten years ago. In the old phonograph the attempt was to make a loud noise, and this was accomplished at the expense of distinctness of articulation. If the voice of the perfected phonograph is as loud as that of a telephone, the result will be satisfactory, provided it is perfectly distinct.

Edison has devoted nearly two years to the task of making the phonograph of commercial use. He believes that be has succeeded. Whether or not the instrument shall enter into every-day life, as the telephone has done, is a question for the future. Certainly it is now a far greater wonder than it was in 1875, and it has reached a point where it cannot again be dropped by the scientific world. Whether Mr. Edison, or Mr. Bell, or some one else puts the final touches which will take the apparatus out of the laboratory and make it practical for common use does not much matter. Some one will certainly do it. Those persons who smile incredulously when it is said that the perfected phonograph will do away with letter-writing, will read to us, will sing and play for us, will give us books, music, plays, speeches, at almost no cost, and become a constant source of instruction and amusement, must have forgotten the ridicule they heaped upon the rumor that an American inventor proposed to talk from New York to Chicago. The achievements of the phonograph will at best be less wonderful than those of the telephone.