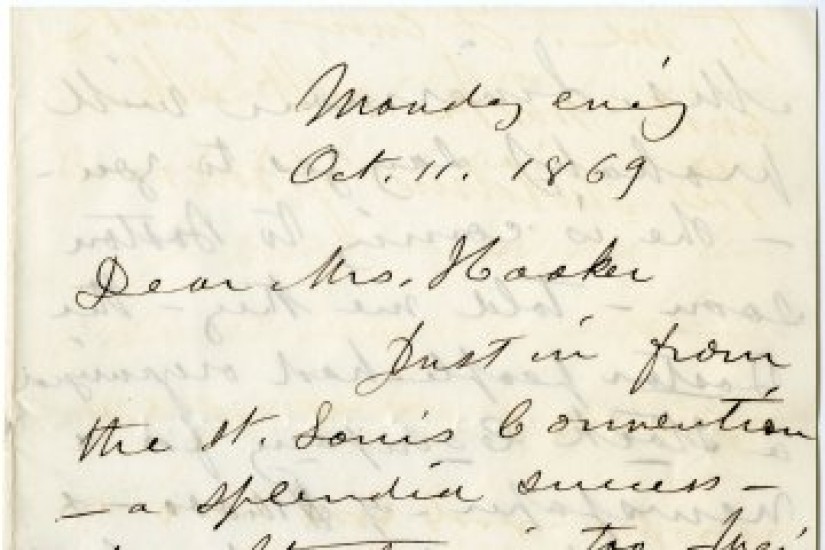 The first page of a letter from Susan B. Anthony to Isabella Beecher Hooker
University of Rochester Dept. of Rare Books

The crate full of papers didn't look like anything special when George and Libbie Merrow found it in their Connecticut attic. Inside, however, was a treasure trove of papers that had belonged to the suffragist Isabella Beecher Hooker in the 19th century. Now, in the collection of the University of Rochester, the letters — from other suffrage icons, including Susan B. Anthony — are a window into the day-to-day workings of the movement for the enfranchisement of women.

Hooker — whose father was Rev. Lyman Beecher and whose half-siblings included Henry Ward Beecher, Catharine Beecher and Harriet Beecher Stowe — received the letters in the Rochester collection in the years between 1869 and 1880. (Though the papers were acquired by Rochester in late 2016, the university — which is based in the city where Anthony is buried — has only just begun publicizing the collection, having spent months organizing and reviewing it.)

At least one of those letters, as seen in the gallery above and transcribed below, is a double whammy of suffrage history: Sent to Hooker in October of 1869, it was written by both Susan B. Anthony and Elizabeth Cady Stanton, two leaders of the women's suffrage movement. The change in handwriting is clearly visible near the top of the third page.