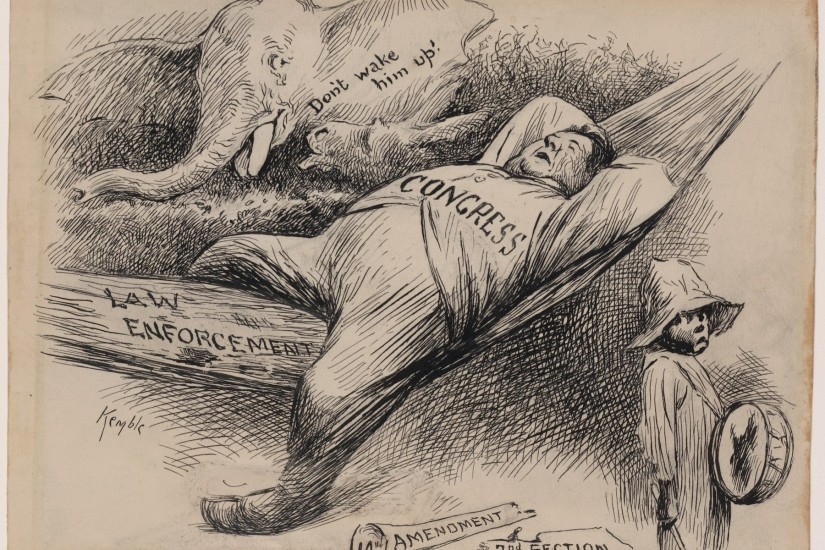 A cartoon referring to Congress's unwillingness to enforce all of the Fourteenth Amerndment (1902).
Wikimedia Commons
…
The Union prevailed in the bloodiest war in American history. But Northern victory consumed much of the North’s strength—including Lincoln himself, its greatest weapon—and in its wake the “Slave Power” re-emerged, as determined as ever. Under the leadership of Lincoln’s successor, the Southern Democrat Johnson, the Southern states prepared to resume their domination over the nation. Abolition of slavery meant abolition of the “three-fifths” rule. That would boost the South, because it would get House seats and electoral votes for five-fifths of its black population—a population which, by order of the new president himself, would not be allowed to vote. By 1868, observers predicted, the South would dominate Congress and the White House, and gain compensation for slaves from its old handmaiden, the Supreme Court. (Fantastical rumors spread that the Democratic presidential candidate that year would be former Confederate General Robert E. Lee.) Republicans in Congress worked frantically to remodel the Constitution before that could happen. They worked in the dark, against the determined opposition of President Johnson. The situation changed day by day; rumors swept the capital that Johnson would use his command of the Army to dissolve the existing Congress and install one of his own choosing. Although they originally planned a series of amendments to the Constitution dealing with specific areas, Republican leaders decided they had one chance—to write an “omnibus amendment” that would disable the “Slave Power” once for all.
Read in light of this story, the Fourteenth Amendment’s sections make sense. Section 1 sets out a standard of one uniform national citizenship, and of fair and lawful treatment for all persons in the U.S., regardless of race, and regardless of whether the person is an immigrant or a citizen.  Section 2 tried to take the “five-fifths” windfall away from former slave states, by depriving them of House and electoral-college power for citizens to whom they denied the ability to vote. Section 3 disabled the leadership of the Confederacy from holding power in the postwar Republic. Section 4 guaranteed that the North’s war debts would be repaid, but that the South could not claim “compensation” for the liberation of its slaves. Section 5 put Congress, not the president or the (hitherto) pro-slavery Supreme Court, in charge of enforcing the new democratic rules. The amendment’s unified aim was, as one of its supporters proclaimed, “a Union based upon universal liberty, impartial justice, and equal rights … a Union of truly democratic states.”

In the years after the Civil War, though, the idealism of the abolition crusade all but disappeared. Bit by bit, the “Slave Power” reassembled itself, with Southern elites using vote suppression, legal discrimination, and extralegal terror to maintain control over closed political systems, and using their members of Congress and their electoral votes to maintain disproportionate power in Washington.

The system was rigged again. The battle over that rigging is the heart of most post-Civil War American history.