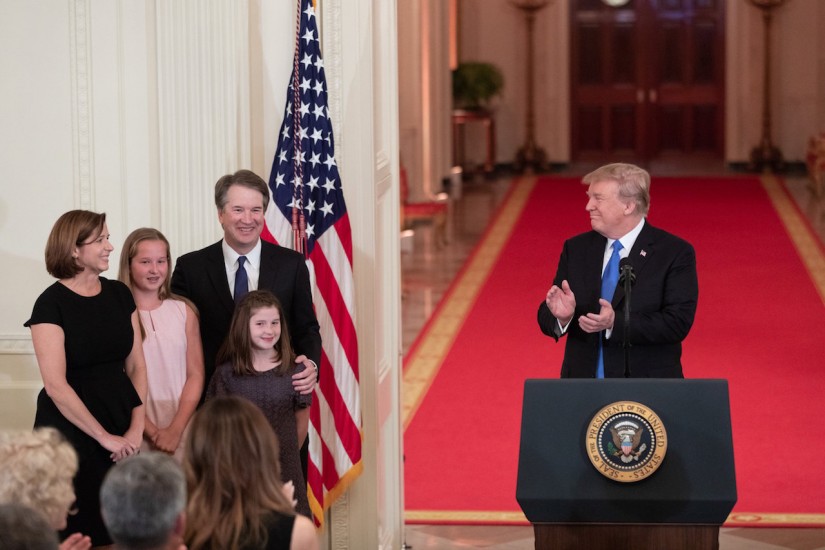 President Trump introduces Brett Kavanaugh (standing at left, with family) as the nominee to fill the Supreme Court vacancy left by the retiring Anthony Kennedy.
The White House

Almost as soon as Anthony Kennedy announced his retirement from the Supreme Court, putting the legality of abortion and the safety of protections for LGBT people in immediate jeopardy, calls started pouring in from liberals and leftists for a drastic response: court-packing.

And the selection of Brett Kavanaugh as Kennedy’s replacement, ensuring the court will move dramatically to the right, only led the calls for court-packing to proliferate.

There is nothing in the Constitution mandating that the Supreme Court have nine members, and a simple act of Congress could increase that number to 11, or 15, or even more. That effectively creates a way for a political party in control of the House, Senate, and presidency to add a large number of ideologically sympathetic justices to the Court, all at once.

To many leftists and left-liberals, such drastic action is needed if any progressive legislation in the future is to survive. The concerns in question have less to do with hot-button social issues like abortion and LGBT rights and more to do with the constitutionality of economic regulation and redistributive programs. Just this past Wednesday, the Supreme Court effectively gutted public sector unions under the guise of the First Amendment. In 2012, there were four votes on the Supreme Court (including Anthony Kennedy) for striking down the Affordable Care Act in full. And there’s an emerging movement of judicial conservatives, championed prominently by Donald Trump’s appellate appointee Don Willett, which wants the courts to become much more aggressive in blocking economic regulation.

If that kind of judicial conservatism comes to dominate the Supreme Court, then even winning back the White House and Congress won’t be enough for programs like a $15 minimum wage, or Medicare-for-all, or a free college plan, to be passed and secured. The Supreme Court would stand ready to rule them unconstitutional nearly as soon as they are passed. In such a scenario, court-packing starts to look like a reasonable defensive measure.