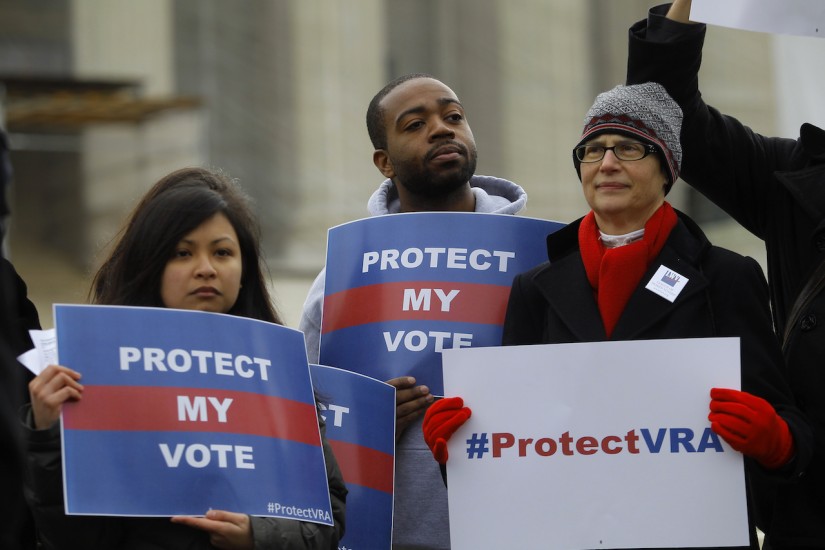 Journalists now commonly say that the Court “gutted” the Voting Rights Act. The more appropriate terminology might be to say that it defanged federal enforcement of that act. But looking deeper, it might be even more appropriate to say that the Shelby County v. Holder decision committed violence against the Fourteenth Amendment itself, of which the Voting Rights Act is a distant descendant. That much has been made clearer as the Court, following a thread of reasoning established in 2013, has taken on additional voting-rights cases, and furthered Roberts’s mandate to distance the federal judiciary from Thurgood Marshall’s vision of those bodies as active watchdogs for the Fourteenth and arbiters for America’s racial injustices.

In June, as the Court closed what would turn out to be the last term of Justice Anthony Kennedy’s career, America suddenly got a glimpse of what Roberts’s mandate in Shelby County will mean for voting rights going forward. First, in Husted v. A. Philip Randolph Institute, the Court essentially gave its seal of approval to Ohio’s system of voter purges, in which the state uses a failure to vote as a trigger to begin the multistep process of taking people off voter rolls. As my colleague Garrett Epps has written, the decision was ostensibly made on a narrow statutory analysis of two laws with texts that might seem to be in conflict in this issue, the National Voter Registration Act of 1993 (NVRA) and the Help America Vote Act of 2002. But as Epps also notes, the decision by the Court to essentially allow a loophole creating a legal method of voter-purging challenges both the intent of the NVRA—another pro-voting statute intended to advance access to the ballot among disadvantaged people—and again marks the retreat of the Court from the role Marshall tried to create for it. Sensing the winds of change, Justice Sonia Sotomayor—who has become the Court’s dissenter in residence—sounded the alarm in her dissent. “The Court errs in ignoring this history and distorting the statutory text to arrive at a conclusion that not only is contrary to the plain language of the NVRA but also contradicts the essential purposes of the statute, ultimately sanctioning the very purging that Congress expressly sought to protect against,” Sotomayor wrote. She continued: The Court’s majority “entirely ignores the history of voter suppression against which the NVRA was enacted and upholds a program that appears to further the very disenfranchisement of minority and low-income voters that Congress set out to eradicate.”
…
View on The Atlantic
View Connections