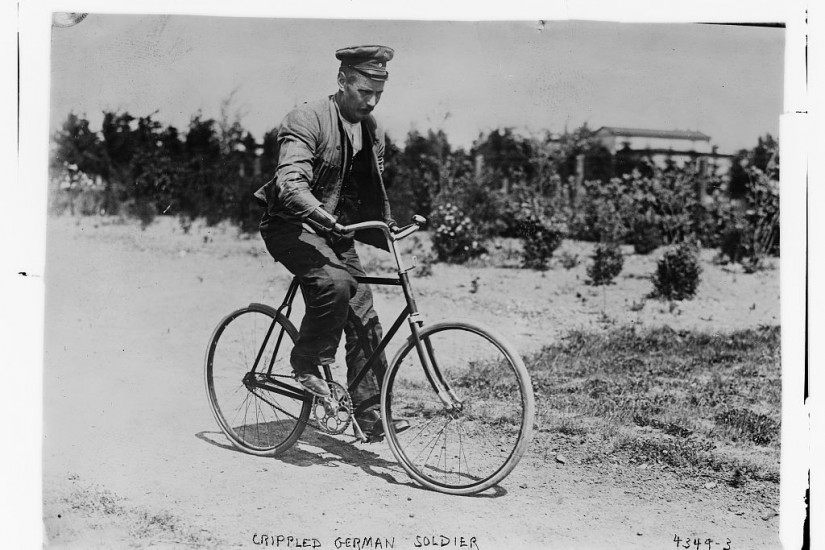 A German soldier with two prosthetic arms rides a bike to work during World War I (circa 1915-1918).
Bain News Service/Library of Congress
…

In America, the major pressure to improve amputee rehabilitation came along with the Civil War, when novel firearms like the repeating rifle left around 35,000 survivors in need of new limbs. Following the war, public funds were devoted to developing and purchasing these prosthetics; in 1866, the State of Mississippi spent more than half its yearly budget providing veterans with artificial limbs. Entrepreneurs, many of them young veterans themselves, recognized the opportunity to create improved mechanical devices that would allow amputees to enjoy more normal lives.

James Edward Hanger was one of these young soldiers, an 18-year-old engineering student at Washington College who left school to join Confederate forces in a small West Virginia town. While waiting for the troops to return from a nearby village, a surprise attack by the Union army sent a cannonball ricocheting into the stable where Hanger was camped, smashing his left leg. Hours later, Hanger was discovered by the Union forces and an above-the-knee amputation was performed. The surgery became the first recorded amputation of the Civil War.

While recovering at his parents’ Virginia home, Hanger worked to improve the standard-issue replacement leg he was given by the Army, a solid piece of wood that made walking difficult and noisy. Within a few months, he created a prototype that allowed for a smoother, quieter walking motion. Though the original patent is lost, Hanger’s adjustments to the generic leg style included better hinging and flexing abilities using rust-proof levers and rubber pads.

Hanger immediately wrote to William Carrington, secretary of the Association for the Relief of Maimed Soldiers, to secure Carrington’s endorsement and the business of his veterans group. A few years later, the Virginia legislature created a $20,000 fund to purchase prosthetics for the state’s wounded veterans, providing even more business for Hanger. By 1890, Hanger had relocated his headquarters to Washington, D.C., and opened satellite offices in four other U.S. cities.

Despite innovators like Hanger, the best prosthetics were still out of reach for most ordinary people, whether veterans or not. These inventive devices were tailored specifically to suit specific tasks or lifestyles, like the special hand with an octave finger-spread and padded fingers created for a British concert pianist. It would require the violence of another major war to make custom limbs a reality for more amputees.