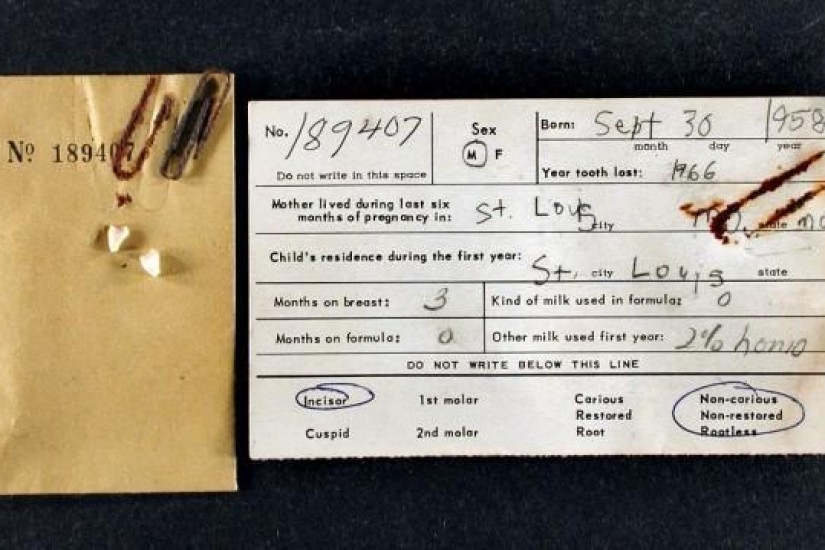 Picture of a tooth, the info card, and the original envelope that were part of the strontium studies in baby teeth that have been stored for years at Washington University's Tyson Research Center in southwest St. Louis County.
St. Louis Post Dispatch/University of Washington at St. Louis
…

In August of 1958, Nature published a brief article by Danish biochemist Herman M. Kalckar. Though scarcely more than a page long, the article’s innovative thesis sparked a vast research project that defied official public safety claims with evidence taken from the mouths of St. Louis’s child population. Scientists suspected that radiation from the above-ground atomic weapons tests taking place from 1945 onward could pose a significant health risk to the populace, but no one knew how much radiation human bodies were absorbing. Atomic weapons detonations released the radioactive isotopes Strontium-90 and Cesium-137 into the environment as explosion debris. These were entirely new substances that had not existed until the advent of nuclear weapons testing. Some of the debris contaminated with these previously unknown isotopes fell to earth quickly, but the rest remained in the atmosphere, mixed with water molecules, and eventually fell to earth as rain. It then passed into the food chain and subsequently into the body. Cesium-137 (CS-137) accumulated uniformly across bodily tissues due to its chemical similarity to salt. Strontium-90 (SR-90), however, was similar to calcium and thus accumulated mainly in calcium-rich areas, posing the potential for cancer in bone and surrounding tissues as it decayed over its twenty-nine-year half-life.

Kalckar opened his article with a disclaimer and a refusal: “Without expressing here any opinion concerning atomic weapons test programmes, I wish to suggest a scientific study which would at the same time have educational values in its practical demonstration of the peacetime value of atomic research.” Not all of Kalckar’s academic colleagues were so reticent. To the contrary, physicists and other scientists had begun voicing grave concerns about the ill effects of fallout from atomic weapons testing programs on public health.

The article’s argument was simple. Geiger counters could measure radioactivity in food, but tracking its absorption into and passage through the human body was a trickier matter. How to measure the levels of radiation absorbed by the human body? Bone samples were one avenue by which accumulation in the body could be measured. However, the limited samples of bone available from autopsied adults provided a small and erratic body of data.

To avoid these problems, Kalckar proposed turning to a different source of samples: children’s baby teeth.