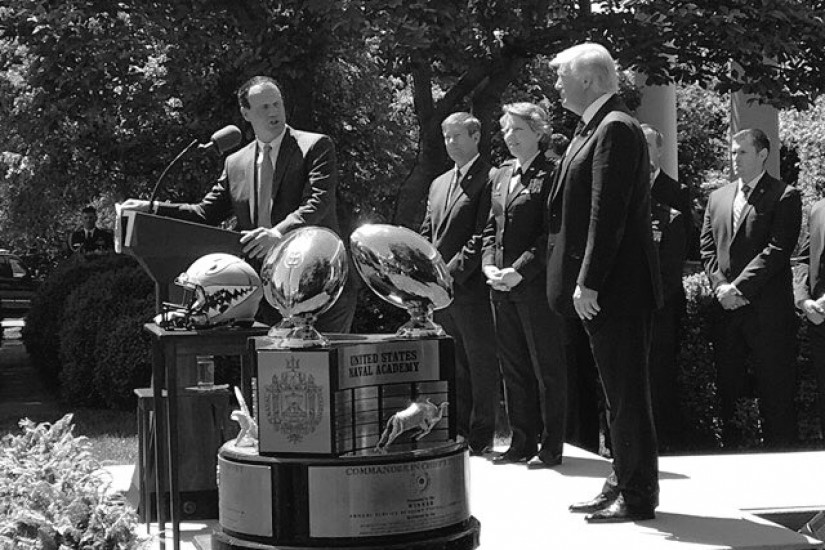 Presentation of the 2017 Command-in-Chief's Trophy to the Air Force Falcons on May 2, 2017.
White House/Wikimedia

It is all connected. Trump’s racist law-and-order politics, his criticism of black athletes, his newfound pleasure in the pardon, and his desire to be loved. His recent pardon of early 20th-century boxer Jack Johnson, who had been convicted of violating the Mann Act, reveals a fraught and complicated history of race and sport that allows Trump to both honor and castigate black athletes for political gain. It shows how sports sometimes serve as an inclusive and democratic space, but one where equality is always conditional.

In the eyes of Trump and millions of other Americans, sports stardom requires adhering to a mythic code of behavior and decorum. Some might call this “playing the game the right way,” pointing to athletics as a character builder. Yet, “playing the right way” is a murky, superficial statement grounded in a complex history of race and class that few fans or popular commentators have an interest in critically exploring. Fans take these platitudes at face value because today the cultural politics are less overt than in the past. They see that sports build character, and appreciate how they make those unlike them admirable by teasing out qualities — such as unselfishness, dedication, and work ethic — that they respect.

These expectations stem from the efforts of Muscular Christians in the late-nineteenth century to reform sports into a palatable middle-class activity. Reformers argued that sport civilized dirty, rowdy, and crude boys by imposing an organizational structure that turned them into hard working, cooperative, and selfless athletes. These reformers proved so effective in investing sport with moral purpose that the phrase “turned boys into men” became a common coaching cliché. Not all boys, however: exclusionary policies like amateurism, which forbid athletes from earning money for their athletic endeavors, kept race and class divisions largely intact.

“Kill the Indian, Save the Man”

Not that minorities were exempt from the transformative power of athletics as uplift. At institutions like the Carlisle Indian Industrial School, reformers sought to test the utility of sport on civilizing native and African-American populations. Building on his experience incarcerating Native American prisoners, Richard Henry Pratt founded the school in 1879 specifically to Americanize Native Americans. He used the motto “kill the Indian and save the man” to illustrate how discipline in general, and sports in particular (especially football), were central to his assimilationist efforts.