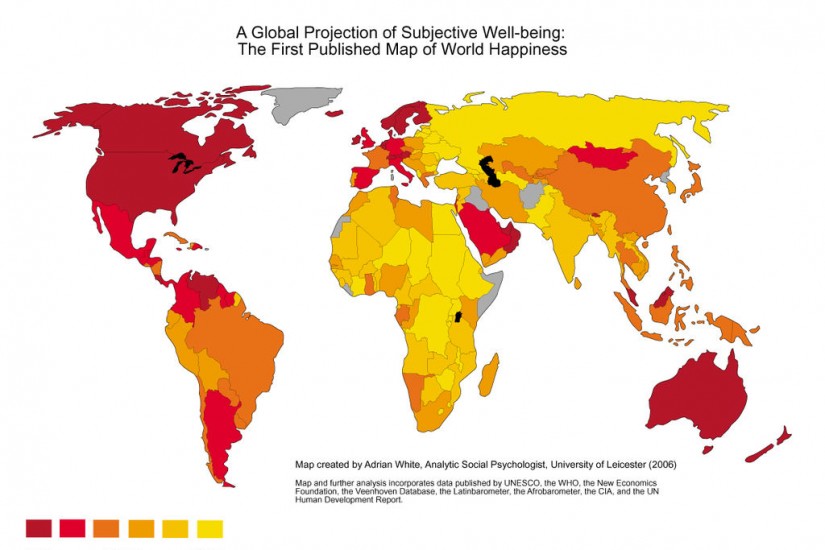 A map of world happiness based on the World Happiness Report (2006).
Wikimedia Commons
…

Last year, the Pew Research Center asked people around the world whether life had been better or worse in their countries fifty years ago. A slim plurality of Americans said they thought life had been better. In 1967, the United States was embroiled in the Vietnam War. Protest marches were taking place around the country, crime was surging, and race riots were breaking out in Detroit, Newark, Milwaukee, and other cities. That spring, a wave of tornadoes injured thousands across the Midwest; members of the Black Panther Party, carrying shotguns and rifles, marched into the California statehouse to protest a racially motivated gun-control law. In June, the Six-Day War broke out. Americans lived in smaller houses, ate worse food, worked more hours, and died, on average, seven years earlier. On the other hand, NASA launched several moon probes and Jimi Hendrix’s “Are You Experienced” helped launch the Summer of Love. By an obscure retrospective calculus, the good appears to balance out the bad. Frightening events seem less so in retrospect. Memory is selective, history is partial, and youth is a golden age. For all these reasons, our intuitive comparisons between the past and the present are unreliable. Many Americans living in 1967 might well have thought that life had been better in 1917.

Nor is this just an American inclination. In “Enlightenment Now: The Case for Reason, Science, Humanism, and Progress,” the cognitive scientist Steven Pinker looks at recent studies and finds that majorities in fourteen countries—Australia, Denmark, Finland, France, Germany, Great Britain, Hong Kong, Malaysia, Norway, Singapore, Sweden, Thailand, the U.A.E., and the United States—believe that the world is getting worse rather than better. (China is the only large country in which a majority expresses optimism.) “This bleak assessment of the state of the world is wrong,” Pinker writes—and not just a little wrong but “wrong wrong, flat-earth wrong.”

Because our ideas about human progress are so vague, it’s tempting to think they don’t matter. But “Is life getting better or worse?” may be a dorm-room debate with consequences. It has affected our politics, Pinker says, encouraging voters to elect unproved leaders “with a dark vision of the current moment.” He quotes from Donald Trump’s Inaugural Address, in which the President bemoaned “mothers and children trapped in poverty . . . an education system which leaves our young and beautiful students deprived of all knowledge . . . and the crime, and the gangs, and the drugs.” In fact, poverty, crime, and drug abuse are declining in America, and our educational system, though flawed, is one of the best in the world. Pessimism can be a self-fulfilling prophecy. By believing that the world is getting worse, Pinker argues, we can make it so.