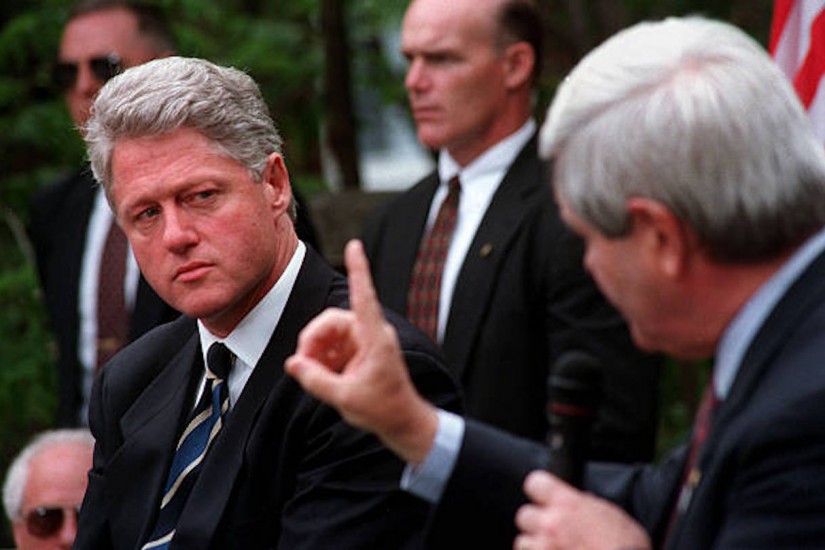 The Clinton years offer plentiful examples of noble goals married with clumsy execution producing devastating consequences. Health care reform blew up badly enough to render it a crime scene that no one dared go near for another decade and a half. The president who attempted to keep his promise to young, progressive supporters by allowing gays in the military ended up signing the retrograde Defense of Marriage Act.

The Republican wave in ’94, framed around Gingrich’s “Contract with America,” sapped much of the policy ambition out of Clinton. Overnight, his focus shifted from persuasion to survival.

For Gingrich, the Republican Revolution was part of a grand plan he began scripting four years earlier. That’s when, as the House minority whip, he had infuriated President George H.W. Bush and the entire Republican leadership by reneging at the last minute on his support for the 1990 bipartisan budget agreement. The budget deal, which required Bush to raise taxes and break his “read my lips” campaign pledge, turned out to be the critical scaffolding on which Clinton’s deficit-reduction plans were built. But it also turned out to be the start to a ferocious revolt within the Republican Party.

“You can draw a direct line from Gingrich’s decision to break with Bush in 1990 to the Contract with America,” says historian and Bush 41 biographer Timothy Naftali. And that line continues long after 1994. The anti-elite, starve-the-beast Gingrich Republicans, he says, paved the way for the drain-the-swamp Tea Party crowd.

And Gingrich clearly had loftier ambitions than simply being elected House speaker in 1994 and upending Clinton’s presidency. As Bush budget director Richard Darman had predicted two years before that, “Newt is on a path for himself to be president of the United States.”

Listen to today’s critiques from the leaders of the left, Senators Elizabeth Warren and Bernie Sanders. Sure, they bash Donald Trump and George W. Bush, Mitch McConnell and Paul Ryan. But if you trace their indictment back to its roots, you’ll see they’re really talking about Clinton.

When they complain about how “billionaire bankers” from Wall Street hijacked Washington, “rigging the system” against the little guys, they’re largely referring to the decisions made by Clinton and his most influential economic adviser, Robert Rubin, as well as Rubin’s deputy and successor, Larry Summers.