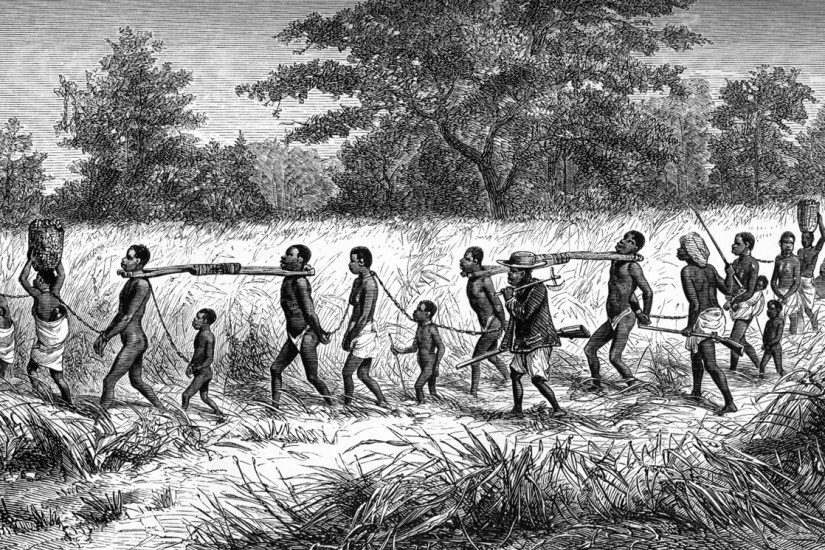 An 1864 depiction of African slave traders marching their captives to the Slave Coast in order to sell them into slavery.
David Livingstone/Wikimedia

My parents’ home, in Umujieze, Nigeria, stands on a hilly plot that has been in our family for more than a hundred years. Traditionally, the Igbo people bury their dead among the living, and the ideal resting place for a man and his wives is on the premises of their home….Down the hill, near the river, in an area now overrun by bush, is the grave of my most celebrated ancestor: my great-grandfather Nwaubani Ogogo Oriaku. Nwaubani Ogogo was a slave trader who gained power and wealth by selling other Africans across the Atlantic. “He was a renowned trader,” my father told me proudly. “He dealt in palm produce and human beings.”

Long before Europeans arrived, Igbos enslaved other Igbos as punishment for crimes, for the payment of debts, and as prisoners of war. The practice differed from slavery in the Americas: slaves were permitted to move freely in their communities and to own property, but they were also sometimes sacrificed in religious ceremonies or buried alive with their masters to serve them in the next life. When the transatlantic trade began, in the fifteenth century, the demand for slaves spiked. Igbo traders began kidnapping people from distant villages. Sometimes a family would sell off a disgraced relative, a practice that Ijoma Okoro, a professor of Igbo history at the University of Nigeria, Nsukka, likens to the shipping of British convicts to the penal colonies in Australia: “People would say, ‘Let them go. I don’t want to see them again.’ ” Between the fifteenth and nineteenth centuries, nearly one and a half million Igbo slaves were sent across the Middle Passage.

My great-grandfather was given the nickname Nwaubani, which means “from the Bonny port region,” because he had the bright skin and healthy appearance associated at the time with people who lived near the coast and had access to rich foreign foods. (This became our family name.) In the late nineteenth century, he carried a slave-trading license from the Royal Niger Company, an English corporation that ruled southern Nigeria. His agents captured slaves across the region and passed them to middlemen, who brought them to the ports of Bonny and Calabar and sold them to white merchants. Slavery had already been abolished in the United States and the United Kingdom, but his slaves were legally shipped to Cuba and Brazil.