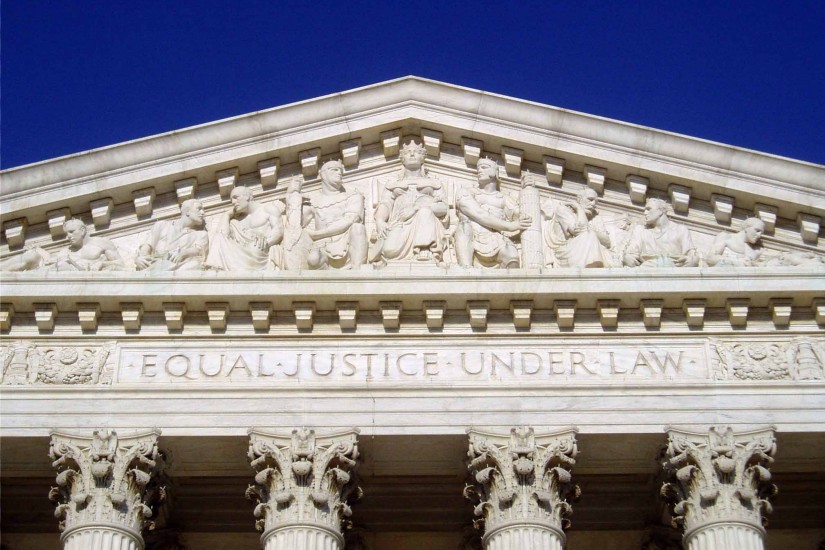 The inscription Equal Justice Under Law as seen on the frieze of the United States Supreme Court building.
MattWade/Wikimedia Commons
…

In the nineteen-eighties and nineties, while the reproductive-rights movement struggled against efforts to overturn or roll back Roe, the gay-rights movement, fighting AIDS, grew. “Privacy” remained a watchword of the reproductive-rights movement—and abortion became more hidden, and more difficult to procure—but L.G.B.T. activists insisted on the importance and the urgency of visibility, of pride, and of coming out. The legal reasoning employed by these two movements began to split. Privacy arguments, long troubling to feminists, were especially troubling to gay-rights activists. And the divide widened when the fight to overturn anti-sodomy laws became a fight for same-sex marriage, a movement whose watchword is “equality.” In many ways, this split made sense: sexuality and reproduction may be private but, as the historian Nancy F. Cott demonstrated in the book “Public Vows,” marriage is public. (Cott, a colleague of mine, has been an expert witness in many same-sex-marriage cases.) Still, contraception and abortion don’t lie entirely outside the state, either, as the continued agitation over public funding of health care for women has made abundantly clear.

Feminist legal scholars began trying to put the equality back into reproductive-rights cases, not least as a matter of historical analysis, pointing out that, in Griswold and Roe, amicus briefs submitted on behalf of the plaintiffs by organizations that included the A.C.L.U. and Planned Parenthood made equality arguments that the Court simply ignored, preferring to base its opinion in these cases on privacy. (The same was true in Bowers: organizations like the Lambda Legal Defense and Education Fund submitted amicus briefs arguing equal protection, but the Court talked about privacy.) The gay-rights movement learned from that dilemma.