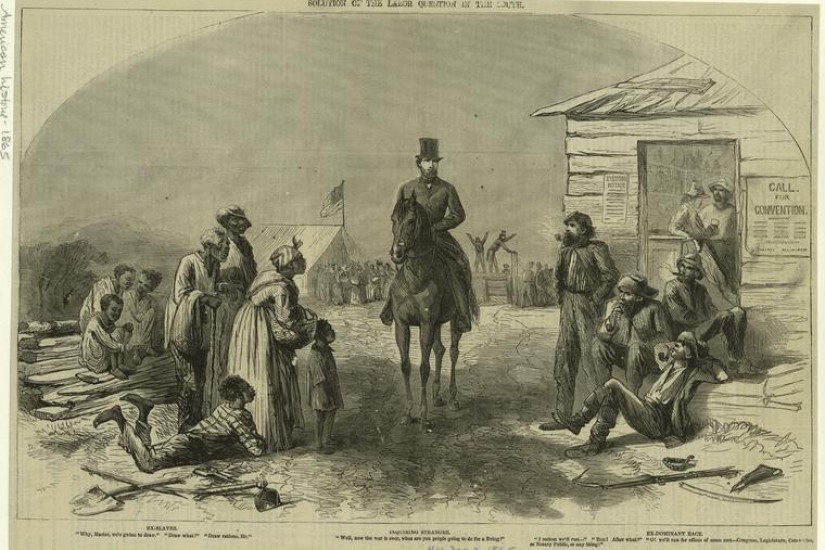 "Solution of the Labor Question in the South,” 1865.
New York Public Library

Recently scholars have come to question “emancipation” as the proper terminology for describing the end of American slavery, preferring instead to discuss the “process of emancipation”—a much more nuanced type of freedom. As we continue to build upon these theories, I contend that black emancipation needs to be recognized for “freeing” the South’s poor whites in several tangible ways.

When judged comparatively with other nations’ emancipatory histories, America’s experience is unique. While African Americans were the only freed slaves to be granted political rights so soon after emancipation, those rights were limited for a people without land, wealth, or job prospects. Most freed slaves left their former homes with little more than the clothes on their backs. Eventually black men were ostensibly awarded the rights of citizenship, but even that was inconsequential if they were jobless and their families were suffering from hunger and want. Newly granted civil rights sometimes rang hollow to people who were left—unprotected—to suffer the violence of vigilante groups like the Ku Klux Klan. The soon-neutralized Fourteenth and Fifteenth Amendments could not help almost four million Americans whose first concern was finding a way to earn a living wage and gain self-sufficiency.

During early Reconstruction, while many former slaves questioned the actual socio-economic benefits of their emancipation, poor whites experienced a time of mostly positive change. Before the Civil War, poor whites had functioned as social pariahs in the Deep South because they had no real place or stake in the slave system, and thus actually stood to threaten it. Slavery had driven the wages of southern white laborers well below those of their northern counterparts, but even more detrimentally, it decreased the demand for white farmers, tenants, day laborers, and even mechanics, creating a large underclass of white people who were unable to find consistent work or earn a living wage. As one laborer from Georgia complained, “the slaveholders could get the slave for almost nothing and the poor young men like myself, could not get a job.” Occasionally this rampant poverty led to well-known psychological and social ills, from depression, fatalism, and apathy to alcoholism, domestic violence, and criminal activity. They made particularly inviting targets for a southern legal system dominated by slaveholders, who generally incarcerated them for behavioral, non-violent “crimes” like trading, drinking, and other social interactions with slaves and free blacks. On the eve of secession, slaveholders were still jailing poor whites for small amounts of debt, publicly whipping thieves, and auctioning off debtors and criminals (for their labor) to the highest bidder. Completely removed from many of the privileges of whiteness, poor whites were essentially “masterless” men and women in an increasingly hierarchical world held together by mastery. This fact deeply troubled the region’s slaveholders.