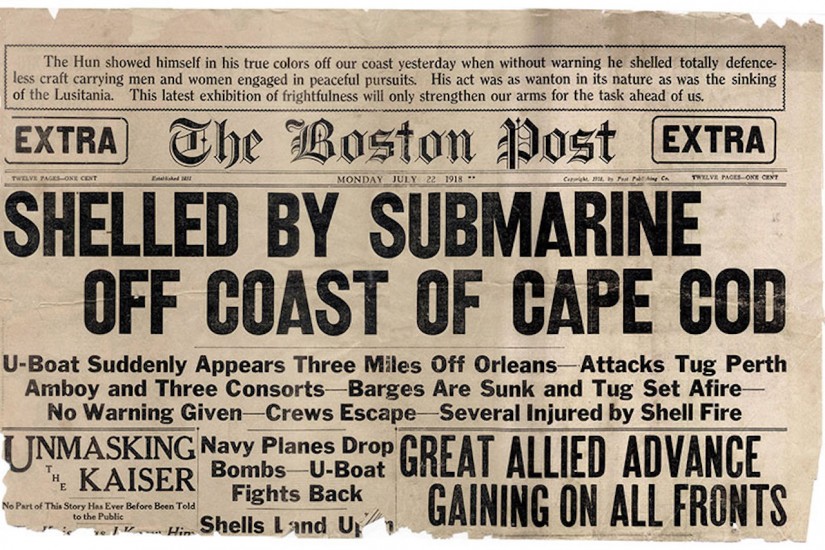 July 21, 1918, dawned hot and hazy in Orleans, Massachusetts. Three miles offshore, the Perth Amboy, a 120-foot steel tugboat, chugged south along the outer arm of Cape Cod en route to the Virginia Capes with four barges in tow: the Lansford, Barge 766, Barge 703 and Barge 740. The five vessels carried a total of 32 people, including four women and five children.

Just before 10:30 a.m., a deckhand on the Perth Amboy was startled by the sight of something white skipping through the water. The mysterious object passed wide of the tug, to the stern. Moments later, that same something crashed into the beach, sending sand high into the air in every direction. A great thunderous roar ripped through the quiet summer morning in Orleans, but those living along the beach were confused—no one was expecting rain. Though residents did not know it at the time, the town of Orleans was making history: the projectile that landed on the beach was the only fire the American mainland would receive during the First World War.

The German U-156 emerged from the haze and inched closer to the tug and, for reasons that largely remain speculative, proceeded to send volley after volley in the direction of the five ships.

The Perth Amboy’s captain, James Tapley, had been asleep. At the sound of the first blast, he staggered out on deck and saw what looked like an enormous submarine.

“This, I was sure, was the source of the trouble,” Tapley quipped in a letter he wrote in 1936.

Tapley braced for impact, but most of the U-boat’s shells missed their target, instead pounding the ocean around the Perth Amboy sending fountains of water up in to the sky.

However, one of the shells fired from the sub’s dual 5.9-inch deck guns crashed into the tug’s pilothouse. The helmsman steering the ship, John Bogovich, felt the structure partially collapse on top of him. Stunned and shaken, he dragged his broken body out of the debris and looked over his injuries, which included jagged wounds above his elbow.