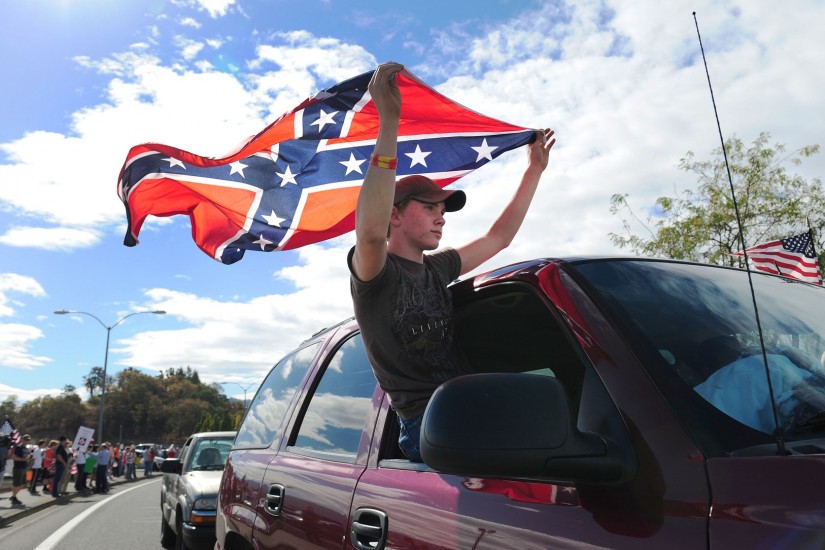 Chance White holds a confederate flag as he drives past a protest in October 2015.
Steve Dykes/Getty Images
…

To many white people in the south and beyond, the Confederate flag is a sign of historic pride and defiance to whatever is currently called “liberalism”; to most black Americans, the flag stands for white supremacy and racial violence. Today, the symbol often appears at “pro-white” rallies and is a lightning rod in America’s calcifying racial divides.

The flag’s history is fraught and complicated, as was the bloody civil war that erupted in 1861 between the US south – where America’s slave trade had relocated and expanded by the mid-1800s – and the north. After the north won, it imposed a harsh Reconstruction on the south that still fuels white resentment today.

The post-war white south embraced the Confederate battle flag, making it their sentimental symbol of the “lost cause” of the war. By the time Mississippi embedded it into its new state flag in 1894, the flag was used to both honor the Confederate dead as well as a romanticized version of the war’s purpose.

By the mid-20th century, the flag symbolized white resistance to ending segregation laws. The Ku Klux Klan flew it at lynching parties and angry mobs waved it outside public schools as black children enrolled; in front of white “segregation academies” and next to leering dogs unleashed on black protesters wanting the right to vote. (Today, its supporters say the KKK co-opted it.)

In April 2001, Mississippians voted along race lines to keep the flag as it was. The debate reignited in 2015 after Dylann Roof killed nine black people in a church in Charleston, South Carolina. A photo soon emerged of him holding a Confederate flag.

The matter is especially raw in Mississippi, a state that suffered tremendous Confederate casualties and went from being the richest state from slavery before the civil war to one of the poorest.

The Isonhoods were the first stop of my May 2018 listening tour of Mississippi with photographer Kate Medley to ask flag supporters in our home state why they still support a symbol that represents so much pain, division and difficult history – even as they urge black Americans to get over their resistance to it.