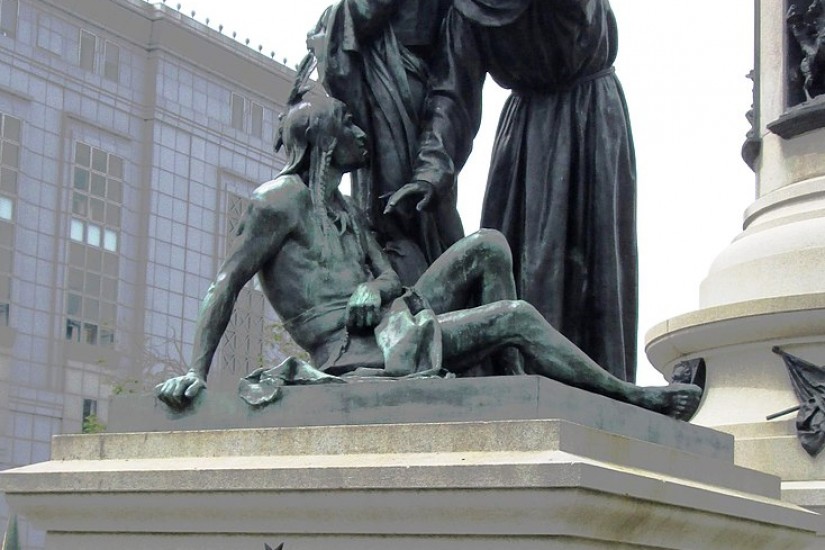 The earliest pioneer monuments were put up in midwestern and western cities such as Des Moines, Iowa and San Francisco, California. They date from the 1890s and early 1900s, as whites settled the frontier and pushed American Indians onto reservations.

Those statues showed white men claiming land and building farms and cities in the West. They explicitly celebrated the dominant white view of the Wild West progressing from American Indian “savagery” to white “civilization.”

But Denver residents expected the figure at the top of the pillar to represent the pinnacle of progress, like “Eureka,” the female figure representing the spirit of California on San Francisco’s monument.

Denver’s residents argued that the monument needed a white man on top, so MacMonnies revised his design, replacing the American Indian warrior with frontiersman and American Indian fighter Kit Carson, on horseback.

By the 1920s, whites controlled most western lands, and they stopped depicting American Indians in their pioneer monuments. New pioneer monuments from Maryland to California focused on western women. Pioneer mothers in sunbonnets stood for white “civilization” winning in the West. And they offered a conservative model of womanhood to contrast flappers wearing short dresses and bobbed hair and women’s growing sexual freedom.