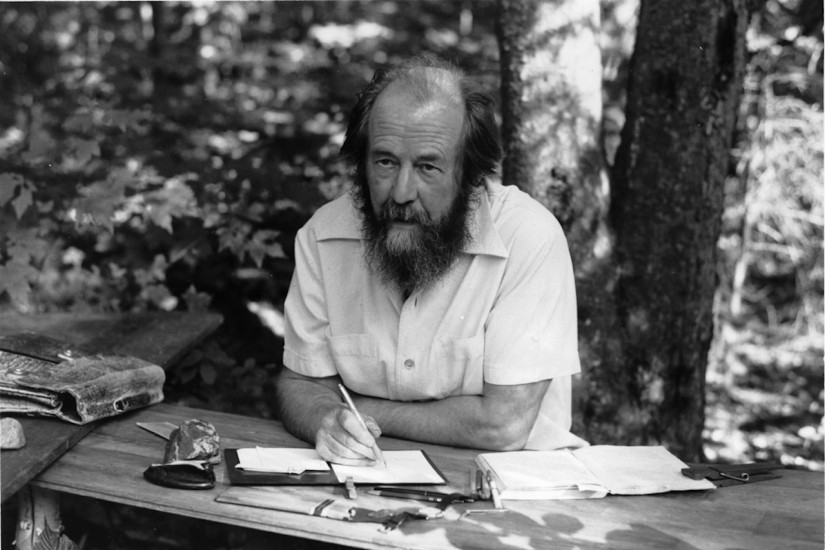 Solzhenitzyn was born in 1918, only a year after the Bolshevik Revolution that created the Soviet Union. Raised in what he later described as “very difficult conditions” by his widowed mother—his father died in a hunting accident soon after his conception—Aleksandr was inspired to become a writer after reading Tolstoy’s War and Peace. Distinguished service in the Red Army did nothing to save Solzhenitsyn from Stalin’s harsh political oppression—he was arrested for writing unflattering comments about the dictator and spent eight years in hard labor camps in Kazakhstan.

During the mild cultural thaw that followed Stalin’s death, Solzhenitsyn was “rehabilitated” and allowed to publish works in the Soviet Union. Some of these writings—including One Day in the Life of Ivan Denisovich, his vivid description of 24 hours in the Soviet gulag system—were translated and greeted by widespread acclaim in the West.

By the mid 1960s, however, Solzhenitsyn’s international visibility and willingness to criticize the regime began to make his status in the USSR increasingly risky. In 1970, he refused to travel to Stockholm to receive the Nobel Prize in Literature, for fear that the Soviet government would not allow him to return home. In 1971, the KGB attempted to assassinate him. Then in 1974, the USSR stripped him of his citizenship and expelled him from the country.

Vermont was not the most obvious redoubt for Solzhenitsyn. With their four young sons, he and his wife Natalia initially settled in Zurich, but the Swiss city did not meet all of their needs.

By 1974, Solzhenitsyn was not an anonymous figure. He attracted the press and others interested in his work. Some of these were well meaning, but others were decidedly not—and there was no reason to assume that the KGB’s first assassination attempt would be its last. Zurich, a large city in the heart of Europe, made Solzhenitsyn too accessible, and allowed him little opportunity to focus on his writing or provide security for his family.

At first, Solzhenitsyn looked to Canada as a potential new home, favoring its remoteness, opportunities for privacy, and the fact that it had a “proper winter.” Natalia, however, had reservations. As she later recalled, she convinced her husband that “although Canada is a most beautiful country, it is somewhat like a pillow. It is a little too boring, and it is too far geographically and in terms of culture.”

That description might apply to rural New England as well, but the Solzhenitsyns felt otherwise. After traveling throughout the region in 1975, they decided Cavendish would be their new home.